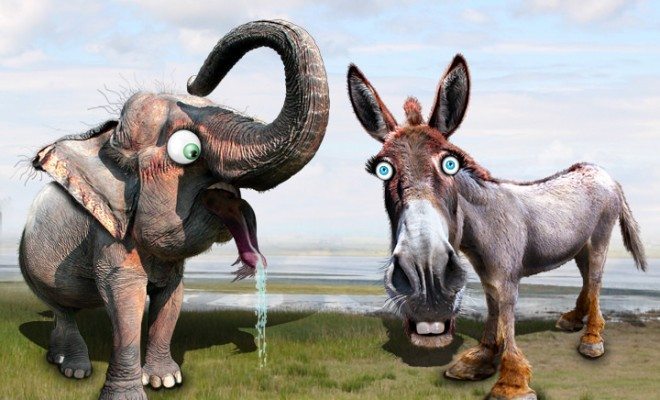 The GOP has really struggled over the last few years with how to woo the young demographic. Voters between 18-29 overwhelmingly voted for Obama in the last two Presidential elections — 66 and 60 percent in 2008 and 2012, respectively. Pundits have done analysis after analysis into the GOP’s young voter problem, and the conclusion is that…many young voters just don’t like the GOP’s message.

Let’s start with the most recent:

A couple days ago, the GOP released these two ads:

They feature your friendly neighborhood hipster who’s here to tell you why he’s a Republican! There have already been a few parodies released, and to be honest, before I inserted those clips I had to make sure that those weren’t, in fact, parodies. These ads will air on networks that young voters, minorities, and women (all groups the GOP doesn’t do well with) frequent, such as Bravo, Food, E!, Hall, HGTV, Life, LMN, Oxygen, OWN, TLC and We.

Ok so here’s the thing about these ads. They depict a white, 20-something male, who is complaining because a lot of his paycheck goes to filling up his gas tank. But he has a gas tank to fill up. He has a paycheck. He can afford to pay his heating bill. As a white male he has probably faced very little discrimination in his life. He’s doing way better than most millennials. The entire ad campaign comes off as entitled, whiny, and alarmingly fake.

And as Gawker points out, the gas policies that he supposedly thinks will make his gas cheaper would actually probably just make energy companies richer and have no affect on his gas.

4. The one time the GOP tried Crowdsourcing

One thing that the Democratic Party has always been good at is rallying young people online. So the GOP jumped on the bandwagon and tried crowdsourcing — reaching out to the internet community for ideas. It was called “America Speaking Out.” And it went spectacularly badly.

The ASO site was glitchy and outdated. Despite Rep. Kevin McCarthy’s (R-CA) claim that he, “personally traveled to Washington state and discovered a Microsoft program that helped NASA map the moon,” the site looked like this, with a terrifying mix of fonts and interfaces:

The site was almost immediately trolled, because, really, it’s just too fun to mess with an attempt this bad.

A close runner up though, is this throwback:

Thank you for saving this, Tech Crunch.

3. When the Heritage Foundation tried to use Buzzfeed.

I do give them some credit here. At least they chose a relevant medium, even though it was poorly done. This summer they created a list called, “That One Time I was Really, Really Excited About Obamacare: Until I Realized Everything I Thought About Obamacare was Totally Wrong.”

The entire list truly is a tutorial in contrived marketing, contains a heavy helping of blatant lies, and feels rather patronizing, but my personal favorite is this part:

“… and made the announcement on the 4th of July … WHO IS PAYING ATTENTION TO NEWS ON THE FOURTH OF JULY?!”

Really, Heritage Foundation? You had a list to make a dozen or so points about Obamacare and that’s one of the ones you chose? The 4th of July is Thursday. Sure, most people have it off work, but the news still exists. I still have access to my computer and TV and newspapers.

But really, guys, stop trying. This isn’t even a well done Buzzfeed list.

Nothing attracts me to a political party like being incredibly creepy. Really, I want to be a part of the party that tells me some terrifying mascot/clown hybrid will soon be my OB-GYN.

On a more substantive note — we all realize what this ad is, right? It’s encouraging young people not to get health care. There’s no way around it. The message is don’t get your health insurance through Obamacare or you will be assaulted by “Uncle Sam.”

And young Americans didn’t respond well. Pretty much everyone agreed that instead of getting the message across, the ad was just creepy and off-putting.

This was a stated strategy of certain groups in the GOP, particularly in the youth wings. Students for Life President Kristan Hawkins stated at a conference last year, “You can engage with sarcasm, it’s hard with the abortion issue, but you have to. Unfortunately we have to, because this is the generation that we’ve been dealt.”

Abortion is a serious issue. It is a personal issue. It is by no means a thing that you joke about. Ever. This right here is so completely indicative of all the issues the GOP has with young people. They think that we care more about energy policies (like the hipster dude in the first ad) than being given autonomy over our bodies. They think we care more about sarcasm than respect. They think we can be bought with cheap taglines and shoddy listicles. Until they learn how wrong they are, I bet you that 2016 election results will be similar to 2008 and 2012.

Anneliese Mahoney
Anneliese Mahoney is Managing Editor at Law Street and a Connecticut transplant to Washington D.C. She has a Bachelor’s degree in International Affairs from the George Washington University, and a passion for law, politics, and social issues. Contact Anneliese at amahoney@LawStreetMedia.com.
Share:
Related ItemsGOPGovernmentYouth