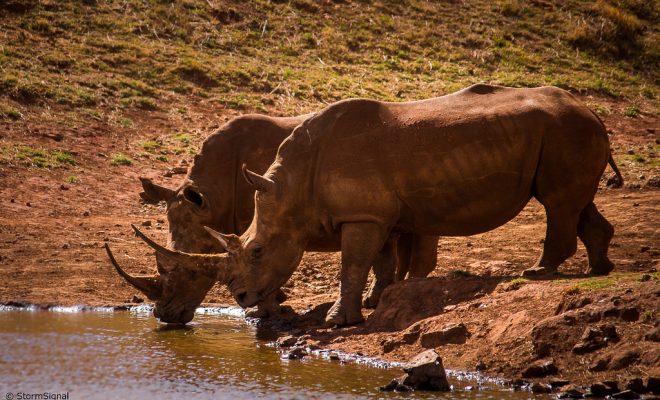 Apparently everyone uses social media these days–even poachers. A string of wildlife traffickers based out of Vietnam have been discovered using Facebook to sell large amounts of ivory, rhino horn, and tiger parts. On Monday and Tuesday the results from a yearlong investigation by the Wildlife Justice Commission WJC, will be presented at the Peace Palace in The Hague.

Investigators combed through a small Vietnamese village, Nhi Khe and found illegal goods worth $53.1 million, sold by 51 villagers both online and in person. Sadly, these products come from what are believed to be 907 elephants, 579 rhinos, 225 tigers, and other endangered species such as pangolins, bears, hawksbill turtles, and helmeted hornbills.

WJC tweeted early Monday morning the upsetting insight that people in the village didn’t even know what the animals used to make their products look like.

#WJCVietnam: @ossendryver on visit to VN found people didn’t really know what rhinos or elephants were ‘as animals’ just as products

The rise of social media has made it easier to sell products from the safety of your home. These sales happen through auctions in closed Facebook groups, where new visitors need to get approved by an admin before becoming members. Smugglers mainly sell processed products made from ivory or rhino, but there are also whole tusks and horns on the market. Payment is made via WeChat Wallet. They seem to be selling locally in Southeast Asia through Facebook, and use WeChat itself to sell to China.

Olivia Swaak-Goldman, Executive Director at WJC, said in a statement: “Our evidence shows that an amount of rhino horn equivalent to nearly half the rhinos poached annually in South Africa transits this village. Stopping this illegal trade requires urgent action.”

But despite all the evidence, the statement said, in combination with diplomatic efforts, the Vietnamese government has not taken any action to stop the illegal smuggling. The government seems to have taken steps to prevent open trade, but behind closed doors, secret trading is still going on. This inaction is likely due to corruption.

However, on Monday morning, during the first part of the hearing, environmental reporting agency IISD tweeted that Vietnamese officials had made an arrest in connection to the wildlife traffickers.

Emma Von Zeipel
Emma Von Zeipel is a staff writer at Law Street Media. She is originally from one of the islands of Stockholm, Sweden. After working for Democratic Voice of Burma in Thailand, she ended up in New York City. She has a BA in journalism from Stockholm University and is passionate about human rights, good books, horses, and European chocolate. Contact Emma at EVonZeipel@LawStreetMedia.com.
Share:
Related ItemsChinaElephantEndangered SpeciesIvoryRhinoRhino HornsSmugglingTigerVietnamWildlifeWildlife TraffickingWJCWWF