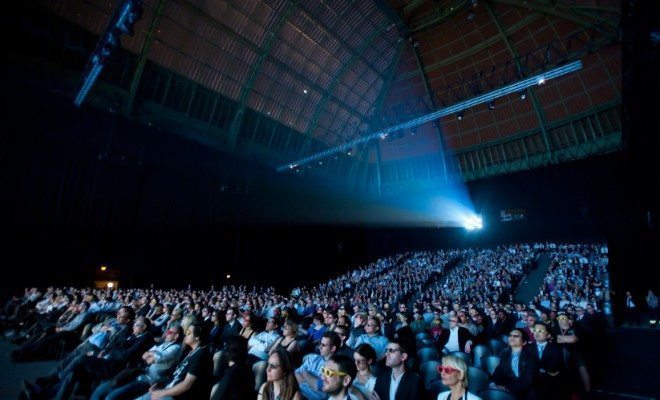 Movies Are About to Get 80 Percent More Visually Exciting

Temporarily escaping the real world while sitting in a theater enveloped by the kind of darkness that can make even the most crowded place feel isolating is a compelling enough reason for me to shell out the money for a movie ticket. But the same can’t be said for some other people. Some can create the same experience in the comfort of their own home with the help of Netflix or diligent web searching for a free version of the latest blockbusters. And who can blame them? Even thought new technology is constantly created, the movie projection industry hasn’t done much to upgrade their technology and improve the viewing experience over the last 60 years. That is, until now.

Movie projectors switched to digital systems around 2000; however, the systems still rely on a 60-year-old technology known as xenon electric-arc lamps. The arc lamps lose their brightness over time, and result in diminished clarity and dimmed illumination. This deterioration of picture quality forces theaters to continually replace equipment or allow customers to suffer through poorly lit movies. Fortunately for movie goers, Laser Light Engines, debuted a new laser projection system that corrects for the problems the old system experiences. The NH’based company’s latest movie projection technology will use lasers to improve the clarity of all images and will significantly enhance 3D projection in a way that has never before been possible.

While all movies will have improved picture, the push for laser projection is directly linked to the demand for 3D movies and the terrible illumination associated with them. For example, one of the popular systems used to project 3D movies is known as the TI system. This system is complex and involves specialized lenses, polarized beams of light, and loads of other technical things that most people can’t explain nor do they care to know about. Anyway, the TI system, in tandem with the arc lamps and their issues of decreased brightness, plus the use of 3D glasses can reduce the brightness of 3D movies by nearly 80 percent. Yes, those awesome 3D movies like Avatar and Gravity that you thought were amazing, may have been 80 percent less amazing than they could’ve been. With laser projection, those days are gone, and we’ll be able to view 3D as it was meant to be seen.

In addition to the enhanced picture quality, Laser Light Engines’ system will create a standardized system for movie capture, distribution, and encryption of digital movies, leading to better movie content security. This is a huge plus for production companies and theaters that lose millions due to illegally manufactured movies. Another benefit of using laser technology systems is that the cost of the new technology is cheaper than the older xenon electric-arc lamps. Consumers will have the bonus of a more clearly projected movie that will also cost less for theaters to provide. (I wouldn’t hold my breath waiting on lower ticket prices, though.)

The only thing I’m honestly upset about is that I won’t be able to catch the new 300 Rise of an Empire movie in all its laser-projected glory. If only the movie Gods would let it be. Other than that minor issue, I say let the laser movie projection commence!

Teerah Goodrum
Teerah Goodrum is a Graduate of Howard University with a Masters degree in Public Administration and Public Policy. Her time on Capitol Hill as a Science and Technology Legislative Assistant has given her insight into the tech community. In her spare time she enjoys visiting her favorite city, Seattle, and playing fantasy football. Contact Teerah at staff@LawStreetMedia.com.
Share:
Related Items3-D3-D MoviesLaser Light EnginesLaser Light ProjectionLasersMoviesTechnologyTheaters