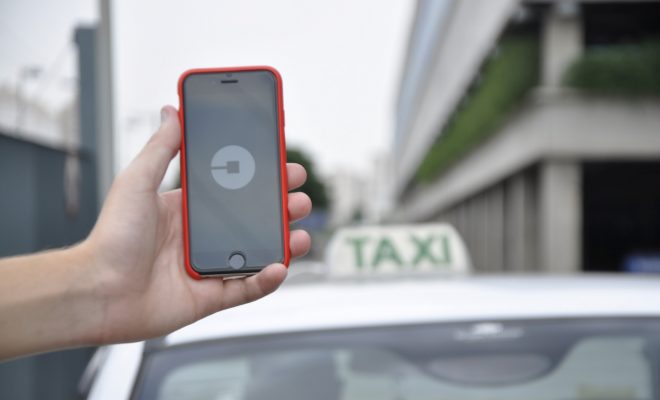 After President Donald Trump’s refugee and travel ban caused chaos and protests at airports on Saturday, New York taxis refused to pick up passengers from JFK airport. But taxi competitor Uber took advantage of the situation, by continuing to offer rides and restricting surge prices–and is now being criticized as inappropriate and opportunistic. #DeleteUber has trended as a result.

The NY Taxi Workers Alliance announced yesterday evening that it was going to cease picking passengers up at the airport:

About 30 minutes after the strike was announced, Uber tweeted out that it would still be operating and wouldn’t implement surge prices–a normal phenomenon when there’s a lot of demand.

Surge pricing has been turned off at #JFK Airport. This may result in longer wait times. Please be patient.

Uber later declared that it didn’t intend to make a political statement. It read: “We’re sorry for any confusion about our earlier tweet—it was not meant to break up any strike. We wanted people to know they could use Uber to get to and from JFK at normal prices, especially tonight.” But, many people were still upset by Uber’s move, and the hashtag #DeleteUber shows why:

Last night I logged in to #deleteuber. Felt reluctance for a split second. then remembered the Montgomery Bus Boycott & felt ashamed. pic.twitter.com/D9WEtmkz6W

Uber’s major competitor, Lyft, also drove to and from JFK last night. But this morning, Lyft released a statement, pledging its support to the protesters, and a promise to donate $1 million to the ACLU over the next four years. The cofounders, John Zimmer and Logan Green, wrote in a blog post:

This weekend, Trump closed the country’s borders to refugees, immigrants, and even documented residents from around the world based on their country of origin. Banning people of a particular faith or creed, race or identity, sexuality or ethnicity, from entering the U.S. is antithetical to both Lyft’s and our nation’s core values. We stand firmly against these actions, and will not be silent on issues that threaten the values of our community.

Anneliese Mahoney
Anneliese Mahoney is Managing Editor at Law Street and a Connecticut transplant to Washington D.C. She has a Bachelor’s degree in International Affairs from the George Washington University, and a passion for law, politics, and social issues. Contact Anneliese at amahoney@LawStreetMedia.com.
Share:
Related ItemsDonald TrumpLyftMuslim BanTravel BanUber