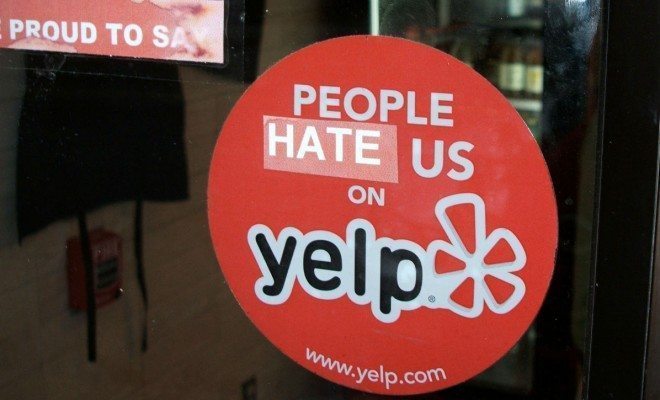 Feeling Extorted by Yelp’s Business Practices? Help May be on the Way

Hadeed Carpet Cleaning, a small business in Virginia, noticed a few negative Yelp reviews and did some investigation. The business claims that after studying their records, the Yelp complaints did not match any actual customer experiences in their books. Hadeed Carpet sent a subpoena to Yelp requesting the identities of the Yelp users who wrote the allegedly unfounded posts, but Yelp refused to comply with the subpoena and the case went to trial.

The Virginia Court of Appeals has sided with the small business and ordered Yelp to reveal the identities of the users. The court reasons that if the users who wrote the unfavorable comments were never actually customers of Hadeed Carpet Cleaning, then those negative reviews amount to defamation not worthy of any First Amendment protection.

Most commentators deride the decision for curtailing freedom of speech; yet, a longer look at Yelp’s litigation history illuminates why this ruling may help those harmed by Yelp.

Yelp has long heard the complaints of small-business owners who claim the company effectively extorts them for money. The common story often begins with a small business noticing a particularly negative comment on their Yelp page. Then the business discovers Yelp’s algorithm filtering out positive comments and thus making negative comments more prominent. Finally comes a sales pitch from a Yelp employee suggesting that the small business advertise on Yelp. Often, the sales pitch includes statements that advertising with Yelp will result in a better filtration process and the removal of negative reviews. Since an alluring Yelp page has a weighty impact on a business’ bottom, many business owners feel threatened by these solicitations.

Yelp has had to squash legal attempts to expose this allegedly coercive practice. In 2011, a class-action lawsuit was filed on behalf of all businesses who declined to advertise with Yelp or who advertised with Yelp in the last four years. The lawsuit claimed that Yelp “unlawfully manipulated the content” of a business’ Yelp page in order to push the business to pay for advertising. In that case, the Plaintiff, Levitt, alleges this story in their Brief:

The Brief outlines other stories with other businesses voicing a narrative that echoed Levitt’s tale about Yelp’s knavish advertising schemes. While Yelp managed to dismiss the lawsuit, that cessation did not help distance Yelp from their alleged aggressive sales practices. Their victory was more technical than substantive. In the lawsuit, the Plaintiffs recounted two exploitative tactics they claim Yelp engaged in: 1.) fabricating negative reviews; and 2.) manipulating a business’ Yelp page to highlight negative reviews and filter positive reviews.

On the first practice, the court dismissed the charge due to lack of proof, not lack of guilt. The court reasoned that businesses could not prove beyond speculation that Yelp actually authored any of the negative reviews that businesses claimed Yelp fabricated. This conclusion had undoubted truth because, up until recently, courts had not allowed businesses to subpoena Yelp about the actual sources behind reviews. Yelp had successfully been able to argue that anonymous users had privacy and freedom of speech rights that prevented access to their identity. If the allegations alleged against Yelp had any merit, Yelp crookedly used freedom of speech and privacy rights as a shield preventing any discovery about their practice of self-composing negative reviews.

The recent ruling in favor of Hadeed Carpet Cleaning has special importance for marking a change in this tolerance. Instead of bending to freedom of speech concerns, the court focused more on the right to protect one’s reputation. Thus, this ruling in Hadeed Carpet might facilitate a proper exploration of the complaints of small-business owners since the court has finally allowed a Plaintiff to learn the identity of dubious anonymous users – and, perhaps, that these users were Yelp employees. While businesses previously had no method to prove their allegations that Yelp penned negative reviews, the court’s ruling in Hadeed Carpet might finally give businesses some recourse.

This seems all the more important, since the second complaint against Yelp – that they filter their messages in a duplicitous manner – has little prospect of victory. In the 2011 class action lawsuit, this claim failed due to the Communications Decency Act (CDA), a Congressional statute that lets “interactive computer services” – like Yelp – edit and manipulate content posted on their website without any risk of liability.

The CDA emerged out of a desire to promote internet freedom and growth. Congress wanted to facilitate the success of websites like Twitter, Facebook, and Yelp by immunizing these sites from lawsuits brought because of the actions of a user on the website. Basically, if a Twitter user says something defamatory on Twitter – like when Courtney Love tweeted that her fashion designer was a former prostitute — the CDA posits that the defamed party can sue the Twitter user, but not Twitter. This allows websites like Twitter, Facebook, and Yelp to function without having the legal burden of monitoring everything that’s said.

Even if these websites have no legal burden to monitor, the CDA still wants to encourage some sort of filtration process to monitor and remove hate speech. Courts have interpreted the CDA to let websites like Yelp filter messages without any risk of liability if they fail to succeed in catching and removing any invective prose. Websites like Facebook have an incredible volume of information, and the CDA hopes to encourage some editing and filtering process even if it sometimes inevitably fails. Consequently, a website faces no liability for their choices to edit or filter content. If the allegations against Yelp have any merit, Yelp again contorts the intention of this policy for its own economic self-interest. Instead of merely filtering hate speech, the allegations contend that Yelp filters innocent, positive messages to induce companies to buy Yelp advertisements.

Importantly, the CDA immunizes Yelp from this practice and courts have said as much. For example, in the Dismissal of the 2011 Class Action, the Judge wrote: “Yelp’s alleged manipulation of their review pages – by removing certain reviews and publishing others or changing their order of appearance – falls within the conduct immunized by § 230(c)(1)” of the CDA. The court even says that the statute currently allows filtering and deleting of comments done with a “wrongful motive.” Even if businesses can prove Yelp filters comments with a wrongful motive, courts have held that the CDA allows websites like Yelp that privilege.

Thus, the ruling in Hadeed Carpet Cleaning has importance to businesses hoping to prove their allegations against Yelp. The CDA literally allows Yelp to manipulate a business’ Yelp page without any risk of liability. The only recourse available to businesses hoping to expose that Yelp extorted them is to prove that Yelp fabricates negative reviews. Such a practice would be a crime, and the best – and perhaps only — way to prove that is through learning the identities of users who post dubious negative reviews.

Importantly, Yelp has officially and repeatedly denied that they engage in this practice. It could just be that these businesses had the misfortune of encountering rogue Yelp sales associates who employ overzealous tactics to earn their commissions. Or, the story could have no truth at all. For now, the CDA and freedom of speech rights have prevented us from knowing.

The main takeaway, however, focuses on how we balance rights. In Hadeed Carpet the court determined that Hadeed’s right to protect its reputation trumped a Yelp user’s right to remain anonymous. These allegations against Yelp highlight how rights always have tradeoffs: if you allow absolute freedom of speech and privacy rights, you disallow any discovery about whether Yelp effectively blackmails businesses. Additionally, sometimes rights tradeoffs occur due to external factors. Might the court in Hadeed have known about the intractable immunity granted to Yelp by the CDA and consequently softened the freedom of speech and privacy rights its users enjoy?

No one actually knows if Yelp engaged in the practice of extorting businesses into buying advertisements. We do know, however, that the law would have allowed them to legally do it…at least before the recent ruling in Hadeed Carpet Cleaners.