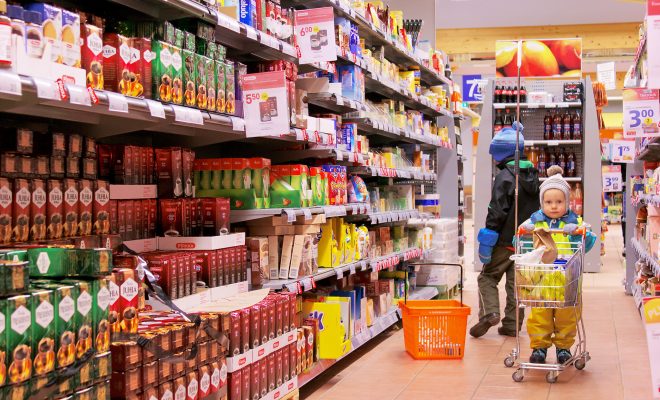 "In the grocery with our little helpers" courtesy of Jaro Larnos; license: (CC BY 2.0)

Amazon is planning to open a line of new, futuristic grocery stores, where you can get everything you need without standing in line or checking out. No more impatiently waiting behind people with an overloaded cart, or realizing you forgot your wallet at home.

It sounds like the future, but the online retailer plans to open the first physical store in early 2017. The first will be located in downtown Seattle, but according to the company’s internal plans, it could open up 2,000 new shops across the country within the next decade.

The company showed what the stores would look like in a video released Monday.

Introducing #AmazonGo, a new kind of store with no lines and no checkout. https://t.co/WMii0bWevi pic.twitter.com/OmZdzobA5F

The shopping would work through an app with the same name as the store–Amazon Go. You would scan your smartphone at a digital gate when entering the store, and then the app would detect which products you pick out and put in your bag. When leaving, the sensors at the exit would notice and the app would automatically charge your Amazon account. Amazon says the stores would use the same technologies as self-driving cars do; computer vision, sensor fusion, and deep learning. The stores would be relatively small, taking up approximately 1,800 square feet.

This seems pretty great for consumers, who would save time and effort by using the Amazon Go stores. But with all this new technology doing the work for us this kind of automation, if it becomes widespread, could lead to a lot of people losing their jobs and source of income. There are already driverless cars in development, so what will happen when that technology is good and safe enough to replace taxi drivers? Likewise, grocery store cashiers are probably not overly excited about Amazon’s new plans.

Amazon Go eliminates the need for cashiers. There are 3.4 million of them in America. https://t.co/GwTvptSjMj

Amazon has flirted with increasing its influence in physical markets for some time now, for example by opening three IRL bookstores with two more on the way. The company also already offers grocery delivery in some major cities. The first Amazon Go store in Seattle is actually already open to Amazon employees, who are currently beta testing the technology. And if everything goes according to plan, it will open to the public early next year.

Emma Von Zeipel
Emma Von Zeipel is a staff writer at Law Street Media. She is originally from one of the islands of Stockholm, Sweden. After working for Democratic Voice of Burma in Thailand, she ended up in New York City. She has a BA in journalism from Stockholm University and is passionate about human rights, good books, horses, and European chocolate. Contact Emma at EVonZeipel@LawStreetMedia.com.
Share:
Related ItemsAmazonAmazon GoFutureGroceryGrocery StoresSeattleTechnology