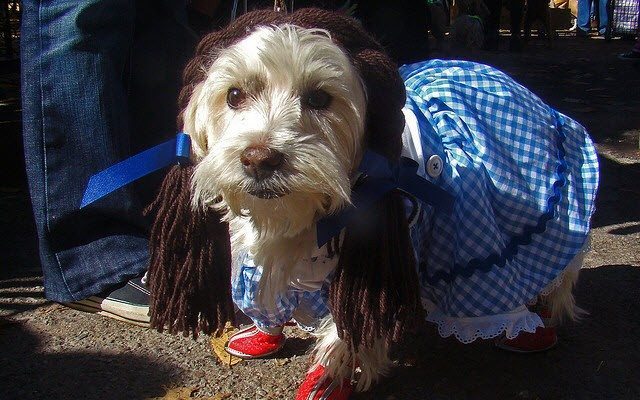 Standing on Four Legs: Animals and the Judicial System

Corporations are legal people, right? They can commit crimes, they can sue other people, and they can vote…at least with their checkbooks. So why aren’t animals people? They can walk and have feelings and be family members; plus, they are just so cute when dressed in people clothes.

There is a real movement among animal rights groups to make animals people in the eyes of the court. Okay, okay. They don’t actually want them to be people, but they do want them to have legal standing to sue. And since people have taken animals to court before, I think it is only fair to finally give animals the right to retaliate.

People Trying Animals (In Court, Not at the Dinner Table)

Admittedly, the concept of a person suing an animal is an archaic one not used today, as far as I know. But at one point in history, mostly in Europe, it was an actual thing. A serial murderer pig kills a loved one in their sleep? Prosecute. A trained dog robber takes out one of their targets? Put that killer on the stand and condemn him to death. If they are capable of committing the crime, then they should be made to do the time.

Courtesy of I Can Has Cheezburger.

Pretty much, if it could walk, crawl, fly, or swim, it could walk, crawl, fly, or swim itself to court. This includes insects (though that one baffles me the most. When an insect causes me harm, I practice a much quicker, more vigilante sort of justice.) And murder wasn’t even all these villainous animals could be and were charged with. A donkey once allegedly committed bestiality, but apparently she had enough character witnesses, one being the local reverend, to be acquitted (the same could not be said of her human paramour, who was sentenced to death). And sparrows were taken in for being too loud in church (I totally get this one. I have wanted to sue birds who were being too loud outside my bedroom window at ridiculously early hours of the morning on more than one occasion.)

Among other animals tried were those accused of being familiars to local witches, those suspected of being werewolves, and one particularly scary rooster – yes I said rooster, not hen – who laid a Satan-spawned egg containing a cockatrice (which, according to Wikipedia, is basically a two-legged dragon with a rooster’s head.)

Not only are the offenses serious, but so are the punishments when convicted. A pig was once “sentenced to be “mangled and maimed in the head forelegs,” and then – dressed up in a jacket and breeches – to be hung from a gallows in the market.” A sow was similarly convicted and sentenced to be hanged, though without even the dignity of a new set of clothes, which must have been extra humiliating.

On the other hand, the court was nothing if not fair. Sometimes the animals would be acquitted, such as in the case of the kindly donkey. My favorite ruling came when a group of rats failed to make it to court. Luckily, they had a good lawyer who pointed out that, as they were a wandering band, they may not have received their summons, and, even if they had, they may have been too afraid of the local cats. Since court is only a requirement when it could be gone to safely and the townspeople refused to lock up their pets, the case was dropped.

Animals Trying People (In Court, Not in the Woods Behind Your House)

In a more modern and more American context, animals and the court are becoming an issue once again. Only this time, it is the animals’ turn for revenge.

In recent years, it has become a point of question as to whether animals should have the legal standing to sue humans for animal rights violations. For example, should a cow be able to sue its potential slaughterer for not making it unconscious before turning it into dinner? Should Tommy the chimpanzee be able to sue his captor for keeping him imprisoned?

As crazy as being sued by your own pet may be, the other side of the standing is that without allowing animals to sue, there may not be another form of redress for these creatures. To have standing, you have to have an injury. When an animal is injured, a human most likely would not be able to get standing on behalf of the creature as the human was not the one injured. Thus, unless animal rights proponents can think of more creative defenses to stop the harmful actions, there is little that can be done to protect the animal.

The downside of allowing animals to become legal people is that they’d become legal people. Detractors worry that granting animals people status will only blur the line between man and beast. As if they think the right to sue is the last distinction we have to tell the difference between a fellow human and a zebra. If a cat can hire a lawyer and litigate, albeit through the help of a guardian, then what is to stop it from driving a car or applying for the position that you yourself wanted?

The disparagers also say that this would encourage frivolous lawsuits – something that no true human would ever do. In a more reasonable stance, some animal suit critics are afraid that if animals can sue, they will sue such organizations as medical research labs and zoos, which in turn could shut down places that theoretically could help humans and the animals themselves.

If this debate interests you, I encourage you to do some research. You won’t believe the fascinating things you will find, and, at the very least, you can see some really clever titles. (My favorites are Monkey See, Monkey Sue and So Three Cows Walk Into Court….)

So far, animal suits have not been successful, but what do you think? Should the courts start allowing whales and snails and things with tails to take the stand?

Ashley Shaw (@Smoldering_Ashes) is an Alabama native and current New Jersey resident. A graduate of both Kennesaw State University and Thomas Goode Jones School of Law, she spends her free time reading, writing, boxing, horseback riding, playing trivia, flying helicopters, playing sports, and a whole lot else. So maybe she has too much spare time.