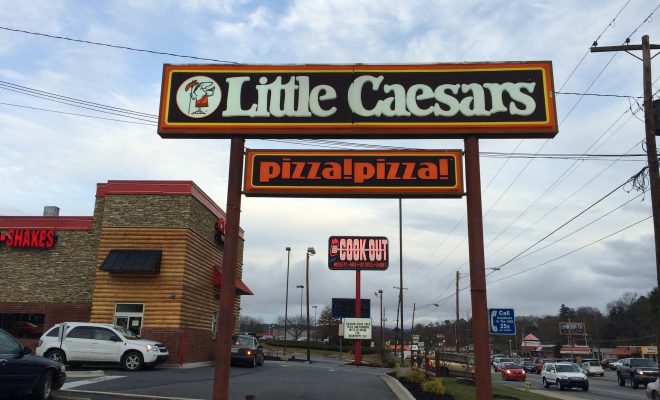 On Thursday, a Muslim man in Dearborn, Michigan filed a class-action lawsuit for $100 million against Little Caesars Pizza which, he claims, sold him a pork pepperoni-covered pizza falsely labeled “halal.” The lawsuit, filed in the Wayne County Circuit Court by Mohamad Bazzi, alleges breach of contract, negligent misrepresentation, unjust enrichment, and fraud.

“It’s really upsetting,” Bazzi’s attorney, Majed Moughni, told the Detroit Free Press. “My clients want the public to know. Especially during Ramadan,” he added, referring to the month-long Muslim holiday that began on Friday, “it would be a travesty if Muslims…in Dearborn bought pizza from Little Caesars and discovered they were eating pork.”

The lawsuit describes the incident: On March 20, Bazzi says he was halfway through eating a Little Caesars pizza with his wife when they realized it was topped with pork pepperoni, not halal pepperoni. They were sure of the pepperoni’s nature, he said, because he used to work at a pizza shop, and his wife is a former Catholic who used to eat pork and can recognize its flavor.

Islamic dietary laws stipulate how certain foods are prepared and, in some cases, some foods, like pork, are banned outright. Much like the kosher meat of Jewish dietary law, halal meat is often prepared and butchered under the blessing of a religious leader. Dearborn, with its dense and thriving Muslim population, is home to a number of halal establishments. Many non-halal restaurants, like Little Caesars, offer halal options.

Jill Proctor, a spokeswoman for Little Caesars, said in a statement that Bazzi’s claim “is without merit.” She added: “Little Caesars cherishes our customers from all religions and cultures, and the communities we serve are very important to us. While we can’t comment on pending litigation, we take this claim very seriously.”

Moughni, who is representing Bazzi in the case, has a history of slightly bizarre legal claims. In 2011, when Moughni was running in the Republican U.S. House race for Michigan’s 12th District, he sued Facebook because it flagged his Facebook page in the run-up to the primary election. And in 2010, in a prescient lawsuit in the age of President Donald Trump’s “America First” platform, Moughni sued former Democratic congressman Rep. John Dingell for allegedly plagiarizing his “Make it in America” campaign slogan.

Alec Siegel
Alec Siegel is a staff writer at Law Street Media. When he’s not working at Law Street he’s either cooking a mediocre tofu dish or enjoying a run in the woods. His passions include: gooey chocolate chips, black coffee, mountains, the Animal Kingdom in general, and John Lennon. Baklava is his achilles heel. Contact Alec at ASiegel@LawStreetMedia.com.
Share:
Related ItemsDearbornHalalLittle Caesars PizzaMichiganRamadanTorts NewsWeird Lawsuits