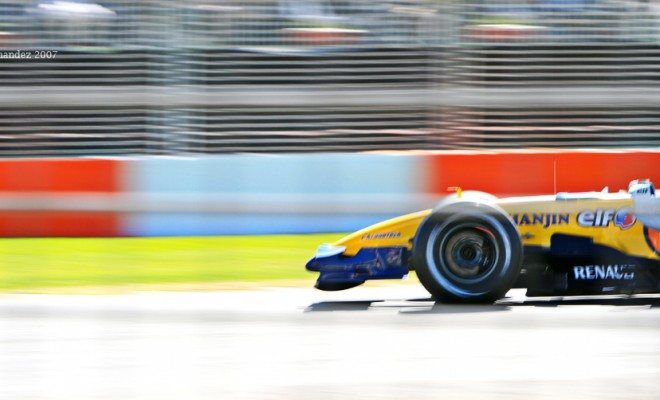 Where are the Women in Formula 1?

Although gender equality in the sporting world is far from perfect, a majority of sports now have women’s leagues. One notable exception is racing–both Formula 1 and NASCAR. Danica Patrick has worked tirelessly to be a visible competitor on the NASCAR scene but few other female American drivers have been recognized. In Formula 1, there are only a handful of female drivers who were recently made to feel even more out of place in their sport when Bernie Ecclestone, Chief Executive of the Formula One Group, said in an interview with The Daily Beast that he didn’t know “whether a woman would physically be able to drive an F1 car quickly, and they wouldn’t be taken seriously.” Ecclestone said in the same interview that he thinks women can break through as executives outside of the sporting world, but by stating that women are not physically capable of driving in Formula 1 Races, he has effectively written them off as trivial rather than valuable contributors to the sport.

You could be more delicate about it, but Formula 1 has been in existence for what, 66 years, and we’ve only seen 5 women try and compete and none have really been successful.
The bottom line is you can make assertions until the cows come home. Saying women can do it. Bottom line, they have to prove it. You can’t just come out of the woodwork and say ‘I want to be a F1 driver.’ You need to earn your way there.  Will it happen one day? It’s impossible to predict, but I’d say probably yes. At the same time, someone else might say, if it was going to happen, why hasn’t it happened in 66 years?  I think it’s clearly more of a men’s sport. Could there be some women who are competitive? Like with tennis… could Serena Williams compete with men? I think yes, but could she win a major, I don’t know.

Former Williams test driver Susie Wolff has stepped forward, stating that Ecclestone’s comments were taken out of context and that Ecclestone has committed to her Dare to be Different initiative, which aims to get more girls interested in motor sports. However, Wolff’s defense of Ecclestone (and his commitment to her initiative) may be too little too late. By claiming that women don’t have the physical capacity to drive at the highest level of racing, Ecclestone has undercut decades of hard work and sacrifice from the women who are pioneering gender integration in Formula 1.

Just because women are a minority in the sport does not mean that they are not capable. When given access to the training, funding, and resources that male drivers receive, women can also compete on the most challenging race tracks in the world. It is a question of opportunity, not of ability. Ecclestone and Andretti are working on the flawed assumption that because no woman has emerged as a racing champion equivalent to a male driver in the past, it would be impossible for such a female to exist in the present or the future. In reality, all forms of sport are based on breaking records and pushing forward rather than being tied to the way the sport was conducted in the past.

When male leaders in the motor sport community dismiss the possibility of female talent, they are shutting the door for the current generation of girls who find racing interesting. These girls may enjoy driving and cars just as much or more than their male peers but when they are constantly told that there is no way they will ever compete seriously, they lose all inspiration and incentive to continue training and racing. Ecclestone and Andretti should have stepped forward and challenged young women to break into the boys’ club of motor sport so that it can become just as diverse as any other major sport. By falling back on antiquated notions of female ability, Ecclestone and Andretti are hammering the final nail into the coffin–if the most high profile and experienced men in the sport don’t think you’re capable, then you can bet no one else will.

Jillian Sequeira
Jillian Sequeira was a member of the College of William and Mary Class of 2016, with a double major in Government and Italian. When she’s not blogging, she’s photographing graffiti around the world and worshiping at the altar of Elon Musk and all things Tesla. Contact Jillian at Staff@LawStreetMedia.com
Share:
Related ItemsBernie EcclestoneCarsFormula 1race carsSexismSexism in the Workplace