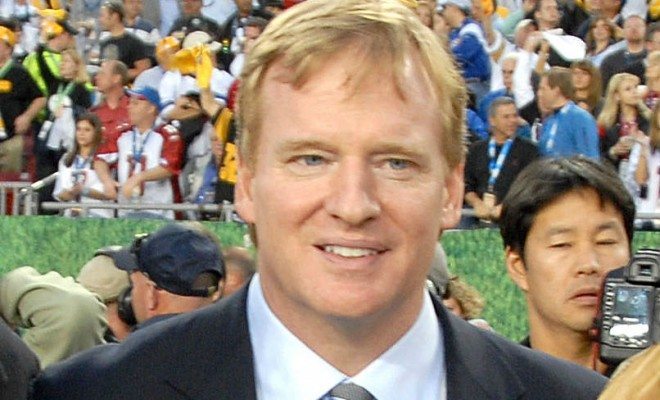 NFL Commissioner Roger Goodell may go down in football history as the least liked commissioner with the best intentions. His effort to deter future head injuries among players by fining violent hits has caused his approval rating with players to sink. His effort to aid the health of former players may not be sufficient, according to a federal judge. And his plan to penalize on-field use of the n-word has been called hypocritical by several journalists (here, here and here, to name a few). So why do haters gotta hate on Goodell? The first two issues have fairly intuitive answers; people don’t like paying fines, and settling decades of severe brain trauma probably requires lots of money. The last issue is a bit complicated, but it ‘s probably because taking baby steps to battle prejudice is considered by many to be aggravatingly stupid.

Goodell’s intentions seem honest enough. Last November the Fritz Pollard Alliance (FPA) — an organization that focuses on  supporting diversity in the League — approached Goodell expressing discontent at the volume of players who use the n-word in the NFL. The FPA again broached the issue with the League last month, and Goodell heeded their advice by proposing it to the NFL’s competition committee. The League is expected now to pass a rule penalizing the slur starting next season.

The move has been hailed by some members of the press, but it has also been criticized as hypocritical in light of the NFL’s much more glaring issue of bigotry: the name of the eighty-two year old NFL franchise in the District of Columbia, the Washington Redskins. The Redskins have been considered a derogatory name for decades, but the debate has gathered steam recently due to their trademark battle for the name. The ‘Skins owner, Dan Snyder, has refused to change the name, and Roger Goodell has given his steadfast support to Snyder on the issue.

Why, you ask? If Goodell’s public statements are to be believed, he genuinely believes that the term “Redskins” is more flattering than disparaging. Goodell and Snyder also seem to genuinely believe, despite the lawsuits, that the majority of American Indian tribes support their name. The other less insane argument is that renaming the near-$2 billion franchise could cost both the NFL and the team big time after all of the branding and intellectual property ramifications are considered.

Whatever Goodell’s reasoning is for supporting the Redskins, his stance is nothing new for those in similar positions. In fact, it seems like an American tradition, perhaps as sacred as football, for those of esteemed authority to get tangled in a web of hypocrisy when they’re trying to placate on the issue of tolerance. Our greatest legal minds held in a 7-to-1 vote that “separate but equal” was an equitable way to deal with racial tension and state’s rights. It took Congress 51 years to afford women the same right as minorities in the voting booth. And still some elected officials and judges find civil unions to be adequate for gays who wish to be married. Watershed moments of civil rights often come after years of slow flooding, rather than through large tidal waves. Were Goodell willing to defy this trend and force Dan Snyder’s hand, he might be able to earn the thundering applause he might like in passing the n-word penalty. But instead, the commissioner of football may have to settle for a golf clap.