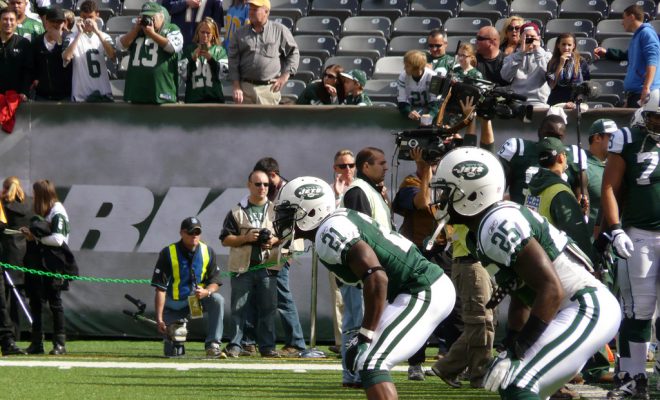 When NFL player Joe McKnight was shot to death in an apparent case of road rage last Thursday, the suspect was not charged immediately, despite reportedly telling the police officers that he was the shooter. The incident caused an uproar; many drew parallels between McKnight’s shooter–a white man–and the numerous instances of white police officers or individuals killing black people. On Tuesday, almost a week later, Sheriff Newell Normand announced that he had charged Ronald Gasser with with manslaughter. He also defended the delayed arrest, explaining that the police wanted to wait until they found reliable witnesses before moving forward.

Sheriff Normand held a news conference on Tuesday in Louisiana to explain the circumstances of Gasser’s arrest. Gasser is a 54-year-old white man who had an altercation with McKnight on a bridge while they were both driving. The two men kept racing each other and shouting, driving into a New Orleans suburb, until they both came to a stop. McKnight allegedly exited his car and walked up to Gasser, who took out his gun and shot the 28-year-old football player three times. He confessed immediately when police arrived at the scene, but initially told officers that he feared for his life and that the shooting was an act of self defense. Gasser was taken into custody but released after hours of questioning.

the craziest thing about the mcknight case is it’s being treated as if the outcome should be in any sort of doubt.

When he announced the arrest at the news conference on Tuesday, Sheriff Normand seemed agitated and defensive, slamming his fists on the podium repeatedly and emphasizing that the department had done nothing wrong. “This isn’t about race. Not a single witness has said… a single racial slur was uttered,” he said. Despite the lack of racial slurs, the incident could have easily been about race. But at this point, the evidence does point to a case of plain road rage.

Says they didn’t charge Gasser Thursday night bc not enough evidence & he was cooperating without atty. Got consent to search Gasser’s home.

The sheriff read aloud some of the racist and foul-mouthed verbal attacks that he, other officers, and lawmakers have received on social media and via email for not dealing with the case fast enough. He read a few out loud that were offensive enough that MSNBC cut away from the live broadcast and apologized for the language. The sheriff said that had they made an arrest right away, witnesses might have been hesitant to come forward. They’ve now found 250 possible witnesses based on license plates placed in the surrounding area.

Gasser’s temperament is certainly at issue–he had a similar fight with another man ten years ago at the exact same intersection. In 2006, he was driving a truck, when a fellow motorist called a number printed on the side of the truck to say that the driver was driving erratically. The number actually went to Gasser’s phone. The two men got into a fight over the phone and Gasser followed the man to a gas station where he confronted him and beat him up. The only consequence for Gasser was a misdemeanor summons that was later dismissed.

McKnight played three seasons for the New York Jets and one for the Kansas City Chiefs. The Jets held a moment of silence in his honor on Monday night before playing a game in New York.

Emma Von Zeipel
Emma Von Zeipel is a staff writer at Law Street Media. She is originally from one of the islands of Stockholm, Sweden. After working for Democratic Voice of Burma in Thailand, she ended up in New York City. She has a BA in journalism from Stockholm University and is passionate about human rights, good books, horses, and European chocolate. Contact Emma at EVonZeipel@LawStreetMedia.com.
Share:
Related ItemsAmerican FootballGun ViolenceJoe McKnightKillingLouisianaManslaughterNFLRoad RageRonald GasserShooting