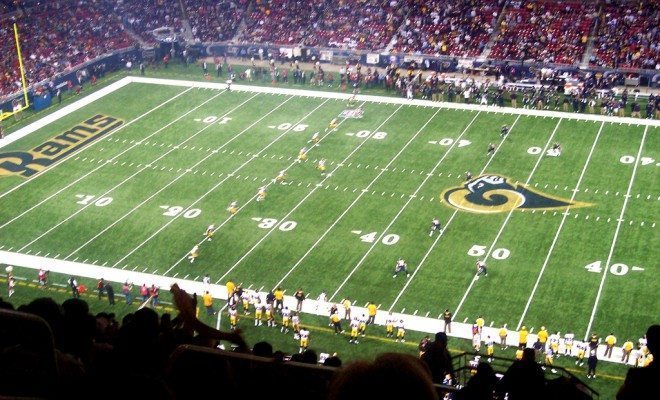 The St. Louis Rams recently announced that they would be leaving St. Louis, Missouri for their new (and also old, given that they played there from 1946-1994) location of Los Angeles, California. However, St. Louis isn’t just losing its NFL team, it’s also now saddled with an all-but-useless, but very expensive, football stadium.

The St. Louis Rams built the Edward Jones Dome in 1995, right after moving to St. Louis. The deal to build it was viewed as potentially problematic by many in St. Louis pretty much from its inception. It was a $280 million deal, and it included provisions that St. Louis would keep the stadium in tip-top shape: it had to be “maintained to a first-tier standard, meaning the facility must be considered among the top quarter of all NFL football facilities.” Naturally, that provision became harder to uphold as the stadium aged, and new stadiums were built.

Recently, while the stadium was still actually being used by the team, revenue didn’t even amount to enough to pay for it, meaning that taxpayers were still stuck with some of the bill. The stadium, as it currently stands Rams-less, will cost taxpayers $144 million in debt and maintenance costs. While that money won’t just fall to the people who live within the confines of St. Louis–it will be also be paid by residents of the surrounding county, as well as the state of Missouri–it’s still a pretty big price tag for a team that now plays on the other side of the country.

St. Louis politicians have attempted to do something about the cost, but likely to no avail. St. Louis Board of Aldermen President Lewis Reed has asked the NFL to help out with the cost, but (predictably) has not received a response, at least as of yet.

Concurrently, the Missouri Senate is trying to pass legislation that would prevent Governor Jay Nixon from issuing bonds on any sort of new stadium without a popular vote or legislature support. It would also require the same provisions for the governor to authorize any improvements to Edward Jones Dome. State Senator Rob Schaaf is sponsoring it, and stated:

We’re just requiring them to get permission that we always thought that they had to have. Who would have guessed that Gov. Nixon would interpret the law to say that they could put us into debt, with a total of payments of $415 million over 30 years, without our say-so.

That bill has created some tension within Missouri’s senate–Minority Floor Leader Joseph Keaveny, a Democrat from St. Louis, told Schaaf: “You’ve done a very good job of discouraging the NFL to stay in St. Louis; I commend you for that!”

So, St. Louis is now saddled with an expensive stadium it has to pay off, and a bunch of angry legislators trying to figure out how to prevent something like this from happening in the future–not great news for the city or state as a whole.

Anneliese Mahoney
Anneliese Mahoney is Managing Editor at Law Street and a Connecticut transplant to Washington D.C. She has a Bachelor’s degree in International Affairs from the George Washington University, and a passion for law, politics, and social issues. Contact Anneliese at amahoney@LawStreetMedia.com.
Share:
Related ItemsEdward Jones DomeLos AngelesNFLRamsSt. LouisSt. Louis Board of Aldermen