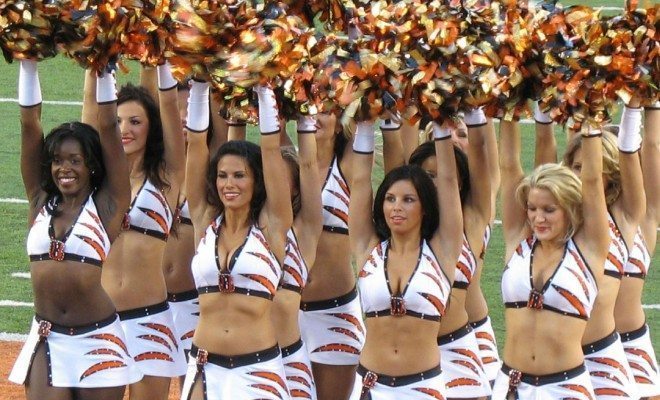 NFL Cheerleaders Are Latest Americans Fed Up With Low Wages

Stop me if you’ve heard this one before. Low-wage workers are pissed that their multimillion dollar employer pays them next to nothing while spending exorbitantly elsewhere and mooching from the same taxpayers they’re screwing. No I’m not talking about the cashiers at McDonald’s or Wal-Mart or the millions of other employees working at or below minimum wage, I’m talking about the cheering squad for the Cincinnati Bengals. Cheerleaders?! Getting paid?! I know, I know. Next thing you know, gays will want to marry and immigrant soldiers will request a path to citizenship. But these ladies actually seem to have a fair gripe, and their story may be instructive on which direction low-wage American workers are headed.

On February 11, 2014, Cincinnati Ben-Gal cheerleader Alexa Brenneman filed a class-action suit against the Bengals organization on behalf of her cheering squad, alleging that her employer violated federal and state wage laws by paying them less than the minimum wage. In her complaint (which can be read here), Ms. Brenneman argues that she made roughly $855 (or $2.85 an hour) for her work as a Ben-Gal cheerleader in 2013. That work included activities such as required practice, charity appearances, makeup clinics, and photo shoots. Ms. Brenneman also claims Ben-Gal cheerleaders received nothing for the time they spent modeling for and promoting the cheerleader calendar, and they were routinely condescended by Bengals management. The statement below, seemingly authored by Big Brother, is from the organization’s Ben-Gal Rules:

Insubordination: Webster defines this word as “not submitting to authority; disobedient.” Syn. Rebellious, mutinous, defiant. Insubordination to even the slightest degree IS ABSOLUTELY NOT TOLERATED!!! You will be benched or dismissed!!!

Authority: ABSOLUTELY NO ARGUING OR QUESTIONING THE PERSON IN AUTHORITY!!!

Ms. Brenneman’s argument isn’t one of a kind. Less than a month earlier, a Raiderettes cheerleader sued the Oakland Raiders for similar wage violations. On a more temporary basis, unpaid interns and volunteers have begun organizing their class-action wage suits against movie studios, publishing moguls, and Major League Baseball.  So why all the hostility?

Beyond the inability to make ends meet, the unpaid and low paid could be upset with the massive pay inequality occurring throughout the country. Labor is becoming cheaper and more dispensable, yet ceo pay is continuing to grow, and is often due to the good fortune and political maneuvering that is not available to the average American.

The Cincinnati Bengals may exemplify this point. The Bengals are owned by Mike Brown, the prodigal son of Bengals founder and NFL mogul, Paul Brown. Mike Brown has owned the team since 1991 when he inherited responsibility upon his father’s passing. Since then, he has widely been criticized, often for poor hiring decisions and for refusing to cede management control of player personnel despite amassing one of the worst records in football during his tenure as owner.

Mike Brown is also despised for conning Hamilton County, Ohio into bankrolling a new stadium for his team. In 1995, Brown threatened to move his team to Baltimore if the county didn’t pay for a new stadium. His tactics worked. Brown, a Republican political donor, secured public financing for his new stadium, which would be paid for in part by increased sales and property taxes in Hamilton County. Paul Brown Stadium is still considered one of the costliest publicly financed stadiums in the country, while Mike Brown and his team continue to make millions.

Although the outrage among low-level Bengals workers may be palpable, things are unlikely to become more fair. Instead of increasing wages, employers often double down on the theory that interns and low-wage workers are expendable by eliminating their position entirely. Condé Nast has ended their internship program after they were sued for wage violations last June. In the world of cheerleading, six NFL teams have nixed their squads, and you can bet this number is likely to grow. Just as employers seek to avoid health care expenses, they seek to avoid costly litigation. So although the Ben-Gals squad may be victorious in their class-action lawsuits, professional cheerleaders as a whole may be the latest group of workers left with nothing to cheer about.