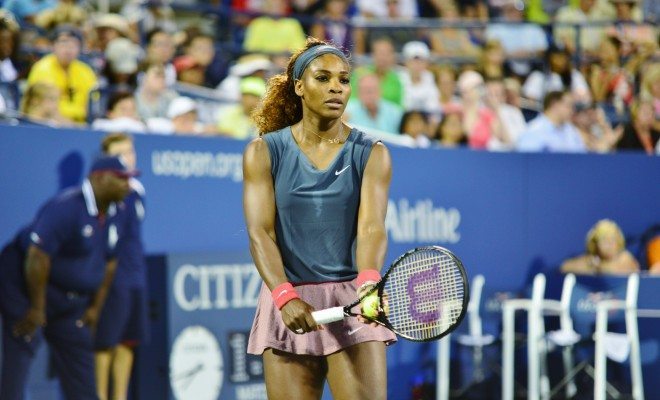 A Lesson in Sexism: Moore and Djokovic Trivialize Women in Tennis

Raymond Moore, CEO of the BNP Paribas Open, left his post this week after he stated that women’s tennis “rides on the coat-tails” of the men’s game and that female players “should get down on their knees” in gratitude for famous male players who have, in his eyes, kept the sport afloat.

Moore’s comments angered tennis players from around the world but even though his immediate removal from his post suggests that the tennis community will not stand for this kind of blatant sexism, there has been a surprising wave of agreement with Moore’s comments.

Famed tennis star Novak Djokovic has claimed that male tennis players should be awarded more prize money at competitions because men attract more spectators. He went on to say that:

[Women’s] bodies–and their bodies are much different than men’s bodies–they have to go through a lot of different things that we don’t have to go through. You know, the hormones and different stuff–we don’t need to go into details. Ladies know what I’m talking about. Really, great admiration and respect for them to be able to fight on such a high level.

Djokovic also said that women have to make “sacrifices for certain periods of time, the family time or decisions that they make on their own bodies in order to play tennis.” Although Djokovic was clearly fumbling to reform his comment into a statement that respected women, the mere concept that women are too “hormonal” to compete on the same level as men and that they should set aside time for family life that male athletes should not is not a compliment nor a mark of respect.

Serena Williams responded to Djokovic’s comment, saying that: “Novak is entitled to his opinion but if he has a daughter–I think he has a son right now–he should talk to her and tell her how his son deserves more money because he is a boy.” Djokovic could have made a simple statistical argument about prize money–tournaments that attract more spectators in person and are viewed more on television should have a bigger prize at the end–but by choosing to make the discussion about female bodies and “hormones,” he has stepped firmly into the camp of sexism.

It is never acceptable to suggest that women deserve to be making less in their chosen place of work, but the insult is especially galling in a field where women have historically been excluded because their bodies were considered too weak to play. Female competitors spent centuries being labeled “enthusiasts” rather than athletes. We are lucky enough to have hundreds of strong female athletes in sports across the world who demonstrate that women are capable of incredible athleticism–but consider that the Olympics only began accepting female athletes in 1900,  the U.S. Women’s Open only began in 1946, the FIFA Women’s World Cup only began in 1991, and the Women’s National Basketball Association was only formed in 1996.

Gender parity is not alive and well in the sporting world, even at the highest tier, where men should respect the women who worked the same long, draining hours they did to become champions. Professional athletes and organizers who participate in tournaments such as the BNP Paribas Open are not ignorant of the training athletes of both genders have to go through in order to become the best in their sport. Less than fifty years ago, Billie Jean King and the other founders of the Women’s Tennis Association had to fight to receive equal pay–male tennis players told them that “No one is going to ever pay to watch you birds play.”

Modern women’s tennis is a testament to the work of King and her contemporaries, as millions of viewers tune in to women’s matches, attend the matches in person ,and follow the careers of female athletes. Yet after comments like those of Djokovic and Moore, it would seem that little movement has occurred since the 1970s.

Jillian Sequeira
Jillian Sequeira was a member of the College of William and Mary Class of 2016, with a double major in Government and Italian. When she’s not blogging, she’s photographing graffiti around the world and worshiping at the altar of Elon Musk and all things Tesla. Contact Jillian at Staff@LawStreetMedia.com
Share:
Related ItemsEqual Paynovak djokovicraymond mooreSerena WilliamsSexismTennisWomen's Rights