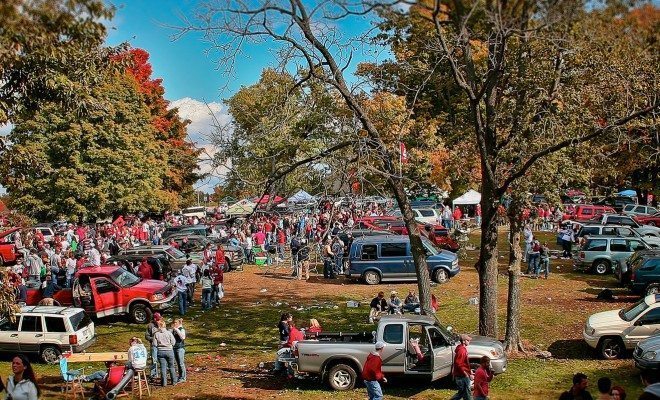 Is There a Connection Between College Football and Rape?

Researchers have determined that there’s a relationship between college football games and incidences of reported rape. The study was released by the National Bureau of Economic Research late last year, but has broken into the news recently, as the conversations around college sexual assault and the violence of football have continued into the new year.

The researchers, led by Professor Jason Lindo at Texas A&M University, discovered that:

The researchers don’t claim this is a direct link–rather they were attempting to look at the connection between events that sparked heavy drinking and partying, and reports of sexual assault. Understandably, then, they found higher reports of rape when something worth “celebrating” happened during a football game–for example, underdog teams upsetting better-ranked rivals. Additionally, game days saw a spike in other crimes–such as disorderly conduct, DUIs, and public intoxication. Given that big college football games usually happen on Saturdays and Sundays–busy party days for college students–the researchers attempted to control for that. According to NPR’s Social Science Correspondent Shankar Vedantam:

Lindo and his colleagues actually tried a control for this by comparing reports of rape on a days the college team was playing to reports of rape on other Saturdays of the year when the team was not playing. So this analysis is focused on the additional rapes being reported to college police and local law enforcement on days the college team is playing compared to what’s reported on a typical Saturday.

In order to conduct the study, the researchers looked at 22 years of FBI data on rape. Given that those statistics have received criticism for being undercounts of sexual assaults, the numbers could be even higher. Additionally, the statistics can’t provide a full picture of all big college football schools, as only 96 of the 128 schools with Division I teams voluntarily reported enough data to be included in the study. However, as they stand, the statistics are certainly worrisome, and worth a look as the fight to prevent sexual assault on college campuses continues.

Anneliese Mahoney
Anneliese Mahoney is Managing Editor at Law Street and a Connecticut transplant to Washington D.C. She has a Bachelor’s degree in International Affairs from the George Washington University, and a passion for law, politics, and social issues. Contact Anneliese at amahoney@LawStreetMedia.com.
Share:
Related ItemsAlcoholCollege FootballCrimeFBIPartyingRapeSexual Assault