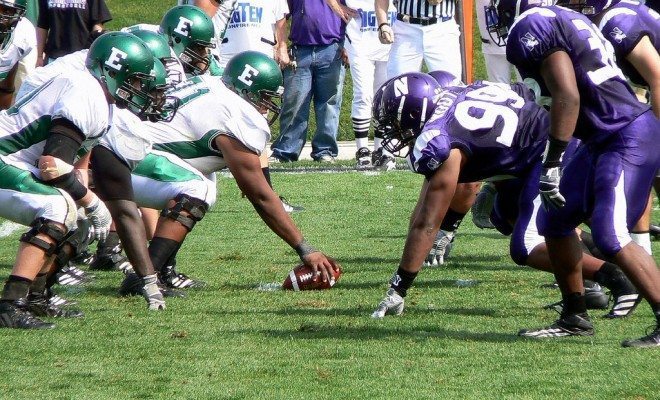 How Will Northwestern Stop its Football Team From Unionizing Now?

For those of us who follow labor law, sports law, or both, March 26, 2014 was a pretty exciting day. Peter Ohr, Regional Director of the National Labor Relations Board (NLRB) for Chicago, held that Northwestern football players are employees under federal law and would be permitted to hold an election in a bid for union representation. Ohr’s 24-page decision has evoked mixed feelings from labor experts, but most consider the decision to be damaging to opponents of unions in college sports.

While the players might have won the first battle, the war for unions in college football has only just begun. As I mentioned in my original post on this controversial topic, the football team is unlikely to actually have a collective bargaining agreement in place for a couple years. And well before that happens, Northwestern University and some other characters will try to ensure a union delegation never steps foot on Ryan Field in Evanston, Illinois. Here are three tactics that they may use to block unionization:

1. The NLRB Appeal Process: Shortly after Ohr released his decision, Northwestern indicated that they would file an appeal. Appealing a regional NLRB ruling first requires filing a request to review with the National Office of the NLRB in Washington. A request to review is essentially an appellate brief requesting the NLRB to revise the decision of the regional office, usually via remand or reversal (an example can be found here). In Northwestern’s case, the request to review must be filed with the NLRB by April 9, 2014. If the request is granted, the NLRB’s judiciary panel (Board) will conduct a hearing to decide whether Ohr’s ruling was made in error, or whether it will be upheld.

2. Contesting the Election Process: Even if the Board affirms Ohr’s decision, the football team isn’t completely in the clear. The team is to vote on union representation on April 25, 2014, at which point all scholarship athletes participating in team activities will be permitted to vote. If a majority is not reached, the players have to wait one year to be eligible to cast ballots again. If a majority is reached but the team has not formed a collective bargaining unit by the time their eldest voters graduate, Northwestern may file an objection to the election in the form of an unfair labor practice (ULP). The ULP would allege that the deciding votes in the election aren’t eligible for union representation, and therefore a new vote would be required.

3. Congressional Action: Last Wednesday, former Northwestern quarterback Kain Colter and company met with Congressional leaders to discuss their campaign to unionize. Many believe the Wildcats’ trip was intended to drum up support in case Congress votes to enact federal law blocking University students from forming unions. That type of Congressional action is just hypothetical at this point, but also quite plausible. Some politicians have already expressed their displeasure with Ohr’s decision, and most forecasters believe the number of union opponents in Washington will only grow after the midterm elections. Considering the stakes and opponents involved, I’m sure Kain Colter would like as many teammates as possible for the upcoming fight.