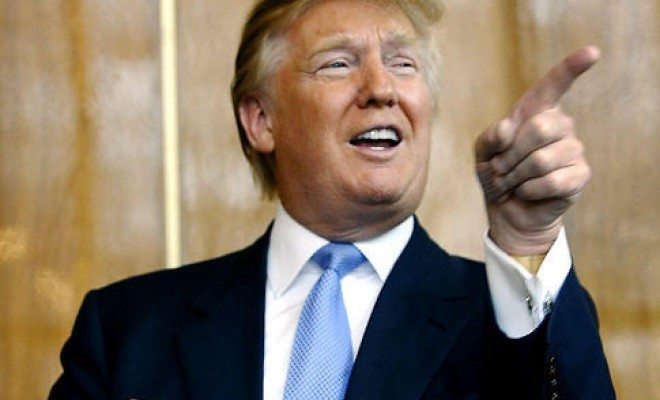 It seems as though Donald Trump has permeated every aspect of our lives these days. He’s all over the news–particularly social media. So when Fox Soccer put out a promo on Twitter for the United States-Mexico CONCACAF Cup game tomorrow, it wasn’t surprising that it featured good ol’ Donald Trump.

(2/2) Well, now watch this Trump pump up video for the #USMNT! Get ready. #USAvMEX kicks tomorrow on @FS1! https://t.co/1mfnfZiqTo

But while it wasn’t surprising, it was upsetting. Fox Sports seemingly made the promo in response to a similar one from Mexican station TV Azteca, which used Trump’s statements to rile up its fan base.

So, here are two promos, both using footage of Donald Trump’s presidential announcement speech to promote a soccer game. So why does Fox Sport’s really feel like it’s in worst taste? It all comes down to the context.

Trump said some truly horrible, racist things about Mexicans in his announcement speech. The most notable quote was probably this one:

Trump’s incredibly disparaging remarks have continued as consistently as his surges in the polls–the man has been running a campaign rife with racism and xenophobia.

So, that TV Azteca promo was at least in part tongue-in-cheek. It was making fun of Americans for the fact that this buffoon is leading the polls to be the presidential nominee for one of our two major political parties. For Fox Soccer to turn around and also use that footage, it sends a concerning message: yes this guy is an idiot, but he also speaks for us. They validated his xenophobia and racism, and that’s incredibly embarrassing.

Many Twitter users seemed to agree, condemning Fox Soccer for the promo:

@FOXSoccer @FS1 Not clicking. Nope, not gonna do it. Trump obviously doesn’t realize how many USMNT players are immigrants.

@FOXSoccer @FS1 Literally the last thing needed in international soccer right now is more xenophobia. Why would you do this? Disgraceful. — Christopher Dwyer (@dwyercd) October 9, 2015

@FOXSoccer @FS1 the other piece was satire, this is disgusting. Horrible way to alienate fans and politicize/corrupt the beautiful game.

.@foxsoccer You might want to check with your market researchers, but I suspect the Fox Soccer audience is not the Fox News audience. — R. H. (@iltuesday) October 9, 2015

Listen, it’s understandable that social media marketers for Fox Soccer want to pump up their audiences however possible, and tapping into already trending topics is certainly a way to do that. But that doesn’t give them an excuse to tacitly endorse racism and xenophobia. Shame on you, Fox Soccer.

Anneliese Mahoney
Anneliese Mahoney is Managing Editor at Law Street and a Connecticut transplant to Washington D.C. She has a Bachelor’s degree in International Affairs from the George Washington University, and a passion for law, politics, and social issues. Contact Anneliese at amahoney@LawStreetMedia.com.
Share:
Related ItemsCONCOCAFDonald TrumpFox SoccerMexicoPromoUS