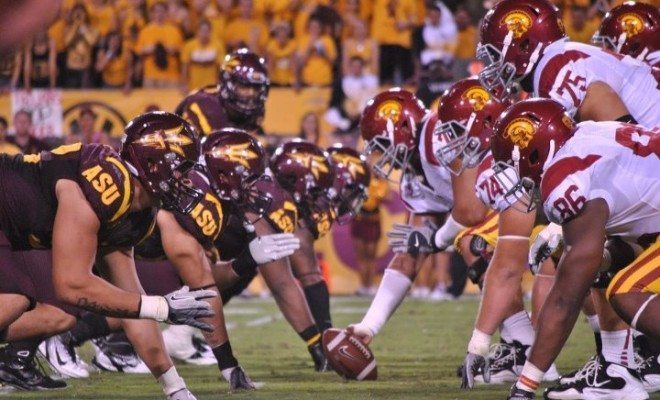 The Fable of the College Football Strike

It’s a chilly November afternoon in Indiana. Simple, God-fearing folks from Fort Wayne to Evansville have gathered with friends and family to celebrate the football game happening in South Bend, just as they do every year. The game would give the winner a good shot at college football’s national championship, and give one team’s fans bragging rights throughout the country for at least a year. But this year there would be no bragging rights for either Notre Dame or USC fans because there would be no game. Hours before kickoff, Notre Dame quarterback Josef Steinbeck (a transfer from Michigan) convinced his team to strike over the team’s early curfew and average salaries. Notre Dame University, Steinbeck’s employer, was powerless because Steinbeck was protected by a big, powerful, union.

This Thayer-esque sports tragedy is exactly the type of yarn being spun by opponents of unions in college football, like United States Senator Lamar Alexander (R-TN) and the Wall Street Journal. These stories have the potential to both entertain and galvanize the casual fan into opposing collective bargaining for college football players, but are they cautionary tales or tall tales?

Generally, unionized workers are permitted to strike only for economic concessions or due to an unfair labor practice (ULP) committed by their employer.  If a union strikes for an economic concession that’s plainly covered by their collective bargaining agreement (CBA) (e.g. strike to compel an employer to raise minimum salaries higher than the CBA permits), a union risks committing a ULP itself, which could lead to fines, sanctions, or even decertification of the union. Unions also can’t strike unless they’ve given ten days notice to their employer, and they can’t strike at all if their CBA contains a no-strike provision. Rather than striking or hashing out issues via proletariat revolution, union complaints are usually either withdrawn or settled.

Still, work stoppages do happen (although apparently not in Canada). In sports though, it’s often not at the behest of the union.  A glimpse at work stoppages in professional sports shows that most are caused when owners refuse to permit the players to work (lockout) rather than the players refusing to play for the owners (strike). In baseball, strikes outnumber lockouts but mainly because the MLB’s perplexing antitrust-exemption prevents players from using alternate means to litigate their beef with management. In other sports, lockouts have typically arisen when CBAs between ownership and players have expired, and the two sides have not agreed upon a new contract. Since it takes two to tango, an unbiased observer would see owners just as responsible for sports stoppages as players are.

Even if the improbable did happen and unionized college players went on strike, would they deserve our resentment? The National College Players Association (NCPA) would be the presumptive union representing most college sports teams, and their demands are fairly modest requests regarding player safety, scholarship guarantees, and the ability to transfer. If a school reneged on one of these issues mid-season and still expected its football player to provide it with its multi-million dollar revenue stream, is the student the bad guy? Not in any story I’ve ever read.