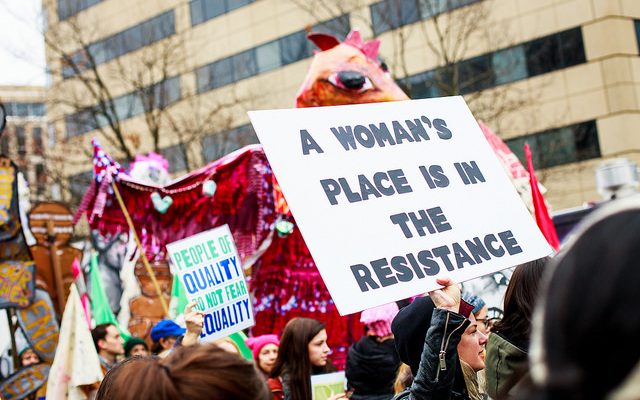 What is the “Day Without A Woman” Strike?

In honor of International Women’s Day, organizers of the Women’s March have declared March 8 “A Day Without a Woman.” Here’s what you need to know about the strike and how you can get involved.

How Can I Participate?

According to the organizers’ website, anyone, anywhere can participate in “A Day Without a Woman” in the following ways:

According to the Huffington Post, all 16 public schools in Alexandria, Virginia, Chapel Hill-Carrboro City Schools in North Carolina, and at least one preschool in Brooklyn, New York, have canceled classes Wednesday in anticipation of staff shortages since the vast majority of teachers are women.

Some businesses and organizations, like NARAL Pro-Choice America, have also chosen to close their doors in solidarity with the strike.

What Is the Goal of “A Day Without a Woman”?

The goal of A Day Without a Woman is to both oppose President Donald Trump and “highlight the economic power and significance that women have in the US and global economies, while calling attention to the economic injustices women and gender nonconforming people continue to face.” The strike hopes to promote awareness for women’s equality issues including: the gender pay gap, paid family leave, and reproductive rights.

It’s hard to say. The only way a strike works is if people actually participate. As Quartz points out, privileged women are more likely to be the ones participating in the strike. A large number of working-class women are expected to abstain from the strike due to the potential repercussions they could face.

Put simply, many women can’t afford to take off an unpaid day of work, or lack any paid time off. Others fear losing their jobs if they strike. In February, a story about twelve employees at the I Don’t Car Bar & Grill in Catoosa, Oklahoma went viral after they were fired via text for staying home to participate in the Immigrant Strike.

The women strike organizers address the issue of privilege, writing:

We must be diligent and look out for each other, using our privilege on behalf of others when it is called for. Social activism is not a privilege. It is a necessity born out of a moral imperative and an imminent threat.

Given the historic number of participants who attended Women’s March events across the country, this strike has the potential to be extremely disruptive. But if even a mere fraction of paid and unpaid women stay home on Wednesday, the organizers will have proven their point–the world needs women!

Alexis Evans
Alexis Evans is an Assistant Editor at Law Street and a Buckeye State native. She has a Bachelor’s Degree in Journalism and a minor in Business from Ohio University. Contact Alexis at aevans@LawStreetMedia.com.
Share:
Related ItemsBlack MondayContraceptivesDay Without a WomanDonald TrumpFeminismGender Pay GapReproductive RightsSTRIKEWomen's March