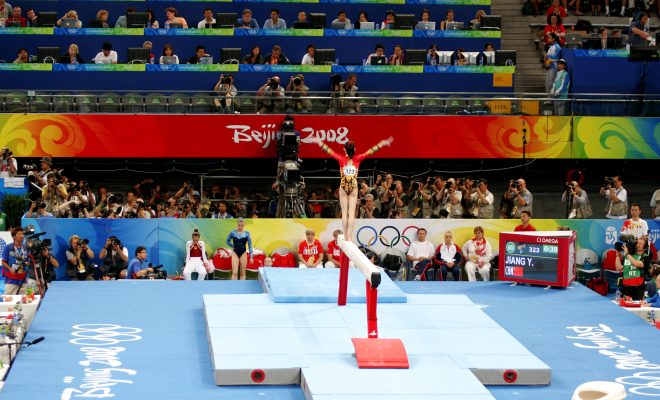 The Forgotten Controversy? Age and the Olympics

In the wake of doping scandals rocking the Russian Olympic and Paralympic Team in the lead-up to the Rio Games, Russian athletes have been painted as the villains of the summer for breaking basic tenets of sportsmanship. However, there has been virtually no outcry over another common violation in Olympic competitions this year: lying about athlete’s ages.

At the Beijing Games in 2008, the Chinese women’s gymnastics teams made waves after accusations that they were younger than 16 years old, the threshold for competing in gymnastics events. Online records revealed that He Kexin was too young to compete but Chinese officials stood by the birthdate on her passport, which made her eligible (although it is relatively easy to obtain a doctored passport). There was “strong circumstantial evidence” that members of the Chinese team were underage but the International Gymnastics Federation cleared the team of any wrongdoing. In 2010, bronze medalist Dong Fangxiao lost her medal from the 2000 Sydney Games after it was revealed that she had been only 14 at the time.  Yang Yun, who competed with Dong Fangxiao, admitted in a television interview that they were only 14 during the Games. Beyond the Chinese team, North Korean gymnasts allegedly have misrepresented their ages in the past. This year’s Chinese gymnastics squad has stayed away from age related scandals as team manager Ye Zhennan reported all of his athletes are of age. However, with their track record of fabricating documents and misrepresenting ages, some observers in the gymnastics world still have their doubts.

It is difficult to gauge an athlete’s age just by looking at them, and we should by all means give the Chinese gymnastics team the benefit of the doubt, but it is fascinating to see how quick the public is to crucify Russian athletes for violating Olympic rules in 2016 whereas the Chinese athletes accused of being underage in the past received relatively little attention this year.

Letting younger athletes compete is not always a guaranteed positive–athletes with more physical training and experience on the Olympic stage can perform better under the immense pressure placed on them during the Games. However, in certain sports, it is the youngest competitors who are in the best shape–consider the number of teenagers from multiple countries who have medaled in swimming in Rio and, of course, the Final Five in gymnastics, who are all incredibly young (at least compared to Olympians in other sports). Younger athletes usually have fewer injuries and have greater stamina. What if Nastia Liukin had been able to compete in Athens? Age restrictions kept her out of those Games, even though she was already becoming dominant in the gymnastics world.

Athletes lying about their ages is not limited to the Chinese national team nor to the sport of gymnastics, but in a sport that rewards youth and, in terms of aerodynamics, small bodies, younger athletes have a clear advantage. Famous gymnastics coach Belya Karoli has argued that the age limit should be done away with, as it robs athletes in peak shape of their chance to compete and encourages cheating. Before the age limit was enacted in 1997, multiple American gymnasts set impressive records while only 14 years of age, which is often considered the height of a gymnastic career. While there are gymnasts who compete into their twenties and beyond, most will retire after competing at only one or two Olympic Games. Athletes who lie about their age can get to three or even four Olympics before they lose sight of making the podium.

The age limit exists to protect young athletes from abuse and the physical and mental pressures of competing with the world’s eyes upon them at such a young age. However, if these athletes are forced to fabricate documents and lie for months or years on end to coaches, officials and their peers, the stress of competition can only be compounded. Is it better to miss an Olympics and have the moral high ground or to compete and win, knowing that you will live in constant fear of being stripped of your medal? At the moment, the age limit is not protecting young athletes, it is merely setting them up for an entirely different rash of problems.

Jillian Sequeira
Jillian Sequeira was a member of the College of William and Mary Class of 2016, with a double major in Government and Italian. When she’s not blogging, she’s photographing graffiti around the world and worshiping at the altar of Elon Musk and all things Tesla. Contact Jillian at Staff@LawStreetMedia.com
Share:
Related Items2008 Olympics2012 Olympics2016 OlympicsChinaChinese GymnasticsGymnasticsRiorio olympicsUSA Gymnastics