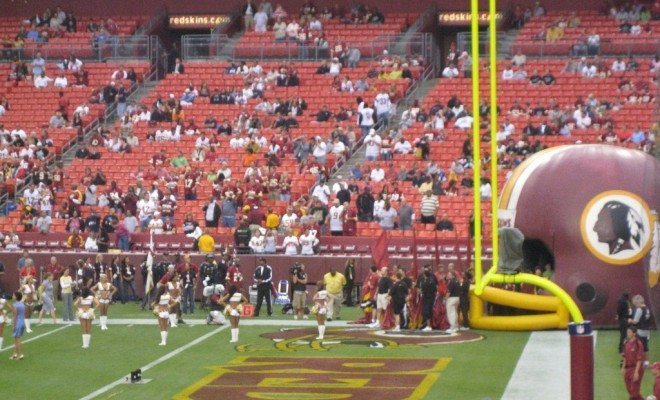 In June of 2014, the U.S. Patent and Trademark office cancelled six federal trademark registrations for the Washington Redskins, declaring the team name “disparaging to Native Americans.”  This ruling was reinforced earlier today and while owner Dan Snyder is scrambling to defend the trademark, this ruling will unfortunately not actually force Snyder to change the name of the team.

Stripping the team of the trademark is an important first step, but there has been no other legal action leveled against the team that will result in an official name change. Snyder and team President Bruce Allen have doubled down on preserving the team name, finding allies in presidential candidates Donald Trump and Jeb Bush. Despite overwhelming protest from the Native American community (and the American populace in general), it seems like the leadership of the team is determined to retain the name by any means necessary. In 2013, Snyder released a letter claiming that:

After 81 years, the team name ‘Redskins’ continues to hold the memories and meaning of where we came from, who we are, and who we want to be in the years to come.  We are Redskins Nation and we owe it to our fans and coaches and players, past and present, to preserve that heritage.

In a nation where there are infinite loopholes that let teams retain offensive names, the Redskins are an omnipresent reminder of exactly how far we still have to go to create and protect racial equality. Snyder’s disconnect from the reality of the American political landscape and the importance of inclusive language is nothing short of disturbing. Eighty-one years of ignoring organized protest against a racial slur isn’t a legacy, it’s a travesty. Snyder “owes” nothing to the “nation”–football fans turn up to games because they want to see their favorite players win, not because they are demonstrating solidarity with the management’s decision to stay on the wrong side of history. His decision to retain the name is purely financial, which is exactly why he has fought so hard to retain the trademarks.

Snyder appears to be fully aware of the nonsensical nature of his claim, as evidenced by his establishment of the Washington Redskins Original Americans Foundation in 2014, which is dedicated to providing resources to Native communities across the country.  If the term “Redskins” is truly a term full of memories and heritage, why would he use the term “Original Americans” when establishing his foundation?  The contradictory nature of the Foundation’s name reveals that Snyder is not ignorant of the offensive nature of the slur. The Foundation is a transparent attempt to assuage his guilt and pacify Native American activists. Despite Snyder’s efforts to build a positive PR strategy, a new generation of Native youth is growing up surrounded by the slur–seeing it on television screens, t-shirts, and toys across the country. Constant use of the slur is not only frustrating for this generation, it endangers their perception of safety and their ability to learn. If Snyder truly wants to clear his conscience and make peace with the protesters, he’ll need to put in more than minimal effort. This is not a minor gaffe or an honest mistake. The use of a racial slur in the team’s name is a conscious action, which prioritizes profit over equality and inclusion.

Not everyone subscribes to the idea of karma, but if there ever was a case for its existence, it is the Washington Redskins. Since Dan Snyder purchased the team, the team has lost spectacularly and consistently. There are dozens of reasons to change the team’s name, but seeing as none of them have yet swayed management, I’d like to put forward a new one:

Snyder, perhaps if you took a racial slur off of your helmets, your jerseys, your field and your merchandise, the stars would align in your favor and you would be able to win a game.

I hate to think that such an insane idea could actually impact Snyder’s attitude, but at this point, it’s not a stretch to think that a man this deluded about the reality of the world believes that stars can control his fate.

Jillian Sequeira
Jillian Sequeira was a member of the College of William and Mary Class of 2016, with a double major in Government and Italian. When she’s not blogging, she’s photographing graffiti around the world and worshiping at the altar of Elon Musk and all things Tesla. Contact Jillian at Staff@LawStreetMedia.com
Share:
Related Itemsdan snyderMascotNative AmericansProtestsRedskinsWashingtonWashington DCWashington Redskins