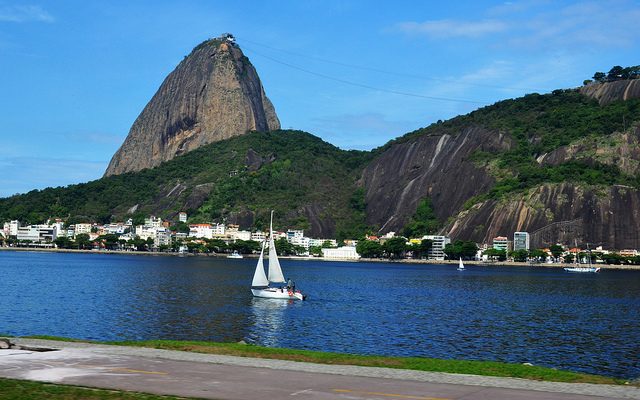 If you watched the 2016 Rio Summer Olympics’ opening ceremony last night, you probably noticed something very different about the traditional procession of athletes from each country. For the first time in history, ten athletes competing without a country walked out under the Olympic flag for the Refugee Olympic Team (ROT), drawing attention to the world’s refugee crisis. Here’s what you need to know:

The ten athletes consist of five runners from South Sudan, two swimmers from Syria, two judokas from the Democratic Republic of the Congo, and a marathon runner from Ethiopia. Their host countries include Kenya, Luxembourg, Brazil, Belgium, and Germany.

Each one of them was forced to flee their countries to avoid violence and persecution. One name you might recognize is Yusra Mardini, an 18-year-old swimmer from Syria. She gained worldwide notoriety after she was forced to swim more than three hours in the sea to get to Greece after the motor in a dinghy carrying 20 people suddenly stopped. Mardini, her sister, and two other swimmers jumped in the water and pushed the boat to shore, saving everyone’s lives.

For more biographies on each of the athletes click here.

Why is this important?

This is the first time ever a team comprised of refugees has been permitted to compete in an Olympics. After identifying 43 athletes that could potentially qualify for the history-making team, the IOC created a fund of $2 million to pay for athlete training.

After fleeing their homelands due to violence and political strife, many of these athletes weren’t sure if their Olympic dreams would come true, but luckily they were able to find a new home and family while in Rio. In a statement on the Olympic website, International Olympic Committee President Thomas Bach said,

These refugees have no home, no team, no flag, no national anthem. We will offer them a home in the Olympic Village together with all the athletes of the word. The Olympic anthem will be played in their [honor] and the Olympic flag will lead them into the Olympic Stadium.

Bach also spoke of the global impact of ROT stating,

This will be a symbol of hope for all the refugees in our world, and will make the world better aware of the magnitude of this crisis. It is also a signal to the international community that refugees are our fellow human beings and are an enrichment to society. These refugee athletes will show the world that despite the unimaginable tragedies that they have faced, anyone can contribute to society through their talent, skills and strength of the human spirit.

Alexis Evans
Alexis Evans is an Assistant Editor at Law Street and a Buckeye State native. She has a Bachelor’s Degree in Journalism and a minor in Business from Ohio University. Contact Alexis at aevans@LawStreetMedia.com.
Share:
Related ItemsOlympicsRefugee CrisisRefugeesRio