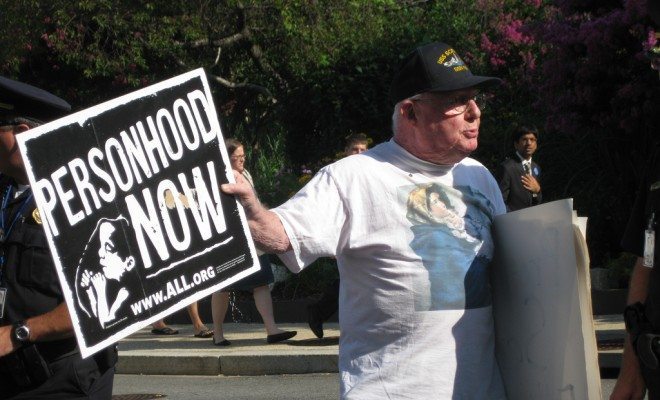 After nearly seven years of relatively little disruption, a Massachusetts abortion clinic was the site of a vivacious protest on Saturday. The protest was three times larger than the clinic’s normal crowd and took place within the confines of the now meaningless 35-foot buffer zone. Last Thursday’s Supreme Court decision in McCullen v. Coakley terminated Massachusetts’ buffer zones around abortion clinics in defense of protesters’ freedom of speech. A consequential storm of criticism from women’s rights groups followed. They posed the question of whether constitutionality should be the sole factor in a decision so influential.

Although I always find myself screaming on behalf of pro-choice advocates, I must admit that the Supreme Court’s ruling does follow the constitution in a very logical and technical sense. But should the Constitution be the final word? Pro-choice activists across the country certainly don’t think so.

SCOTUS’s decision to strike down the buffer zones stemmed from their broad definition of anti-abortion advocates’ free speech. Chief Justice Roberts wrote, “here the Commonwealth has pursued interests by the extreme step of closing a substantial portion of a traditional public forum to all speakers,” referring to sidewalks where protesters typically congregate. Eleanor McCullen, the grandma-esque poster woman for abortion opponents, argued that the buffer zones were unnecessary because the exchanges they sought to restrict were peaceful, not violent. However, an abortion opponent could just as easily whisper a dangerous threat as they could shout it.

Justice Scalia pointed out that the close, personal interactions being defended by this ruling were a perfect example of what the First Amendment is intended to protect–the right to try to persuade others. He even went on to compare these conversations to protests that occur in other scenarios, such as protesters outside the Republican National Convention or voting stations.

At this point, I know I was not alone in thinking: did he really just compare getting an abortion to filling out a ballot? It’s not like choosing a political party. It’s not a choice you can alter or change with time. It’s a choice that will change your life forever and not one that should be taken lightly. It’s a choice that you should be so firm in that a peaceful chat outside a clinic would not persuade you to change it. It’s a choice that will affect you for the rest of your life. Most importantly, its a personal choice, not one subject to public discussion and attack.

Yes, I said “attack.” Just because it’s not screaming, loud, and belligerent, doesn’t make it polite or okay–harassment can take many forms. For example, most anti-abortion protesters shame patients silently with posters calling them killers, or with pictures of living, dead, or mutilated babies. The Boston Globe shared a statement from a young woman entering the aforementioned Massachusetts clinic on Saturday. She said, “you have to walk through this circle of people staring at you and talking to you and judging you…it’s very intimidating.” This shaming can bring as much emotional pain as any violent act.

The term ‘demonstration’ includes demonstrations, picketing, speechmaking, marching, holding vigils or religious services, and all other like forms of conduct that involve the communication or expression of views or grievances, engaged in by one or more persons, the conduct of which is reasonably likely to draw a crowd or onlookers.

In fact, the closest public place where protesters would be allowed to hold demonstrations is 252 feet from their front doors. So, not only do the hypocritical justices have their own buffer zone, but it is more than seven times that of the Massachusetts clinics. The irony is truly nauseating.

What the Supreme Court should have considered:

The only silver lining is that the Supreme Court seems to realize the need for some safeguard for entering patients. They contended that there are alternative steps that the Massachusetts legislature can take to ensure the protection of clinic patients. But in the meantime, women in Massachusetts must forgo the protection, however seemingly scant, that they were once guaranteed before entering abortion clinics.

Erika Bethmann
Erika Bethmann is a New Jersey native and a Washingtonian in the making. She is passionate about travel and international policy, and is expanding her knowledge of the world at George Washington University’s Elliot School of International Affairs. Contact Erika at staff@LawStreetMedia.com.
Share:
Related Items1994 Abortion Clinic ShootingAbortionFirst AmendmentFree SpeechMassachusettsMcCullen v. CoakleyPro-ChoicePro-LifeSupreme Court