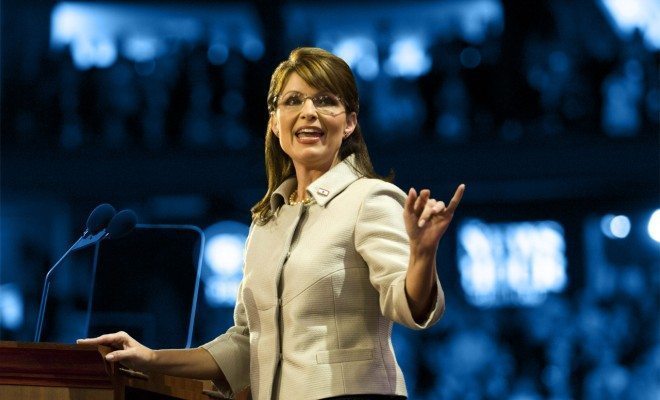 America, Sarah Palin Has Her Own TV Channel

Sarah Palin is fed up with the Liberal Media bias and is doing something about it. She started an online TV channel called the Sarah Palin Channel that’s going to make Fox News look like MSNBC.

In the introduction video, Palin says this is going to be a news channel that is going to be a lot more than news: it will get around the “media filter” and “find solutions.” Reading between the lines, Palin is saying, “The media has filtered me out, so I had to start my own channel. And I want to share my solutions that were too crazy for FOX.” In the video Palin also says that her channel will cut through “Washington DC’s phony capitalism.” So I take that to mean she will continue to call Barack Obama a socialist, while refusing to look at the actual definition of socialism.

The channel will also have very engaging guests and while she did not mention any names, a clip of Ted Cruz campaigning was rolling in the background. I thoroughly look forward to their “Who hates Obama more” and “Because the Bible told me so” segments.

Also, there is good news if you were a fan of Sarah Palin’s reality TV show. The channel will also give viewers a glance into her family’s daily life. They are just like any other American family…that has a ton of money. Watching the Palins really allows you to see how she relates to all those average Joes (read: white people) she talks so much about. And I am sure she will argue that because of her close proximity to Russia, she knows better than anyone how to deal with Putin.

Of course, if this channel is going to be more than news, it might be looking for some TV show ideas. Well, the masses have taken to Twitter to help Palin with some ideas for brilliant television. Here are some of the best:

One of the central themes of the channel, according to Palin, is that it’s about you. But there is one person the site focuses on much more than any other and I doubt that is the “you” Palin was referring to. This person is President Obama, and wow does he seem to be the main focus of the Sarah Palin Channel. Three of the seven stories on the site feature the President, and it even has a clock counting down to the end of the Obama administration. I am guessing it is a countdown to remind Palin when she will lose any relevance she might still have.

So in conclusion, Sarah Palin has her own TV channel because being a contributor on FOX News was too constraining for this maverick. The channel is supposedly about you, the viewer, but primarily focuses on Sarah Palin, her family, and Obama. And sadly, just in case you had any hope that this was a joke, this is not Tina Fey parodying Palin — though it can be very hard to tell the difference.