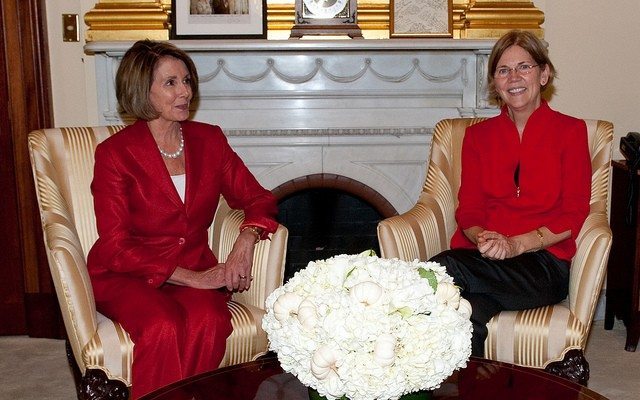 It’s All About Respect: We Need More Women In Politics

Monday night I was watching Late Night with Seth Meyers  with the hilarious Bill Hader and Representative Nancy Pelosi as his guests. The House Minority Leader is no stranger to late night television, especially in recent months as she has been interviewed not just by Meyers but also by Stephen Colbert and Bill Maher.

One of the agendas Rep. Pelosi talks about in most interviews is her economic plan for women under the slogan, “When Women Succeed, America Succeeds”. I love this for several reasons, but most of all because we have the most powerful woman in American politics promoting equal rights for all genders. She shows that it is not only possible for women to succeed, but also that once they do, they have the platform to promote women’s rights on a larger scale.

My favorite quote of hers from the night was:

“Whether it’s about respect for women, a woman’s right to choose…equal pay for equal work… whether it’s protecting women from domestic violence, violence in the military, violence on the campus; all of it is about one word, and that is respect. The opposite is disrespect, and that’s what we have to fight.”

Rep. Pelosi is not the only woman in congress promoting women’s rights, but as the first female Speaker of the House and current leader of Democrats in the House, she certainly has a larger following. According to the Center for American Women and Politics however, in 2014 women hold only 18.5 percent of the seats in Congress.

While 18.5 percent is leagues ahead of where women were 50 years ago, it is not very reflective of the American population. Women make up 51 percent of American citizens, yet we hold less than a fourth of the seats in the national government? No wonder women’s rights continue to simmer on the back burner!

The list of excuses for this imbalance is long and varied. Growing up in a conservative small town, I heard numerous insults thrown at women who dared to go for higher political office. They ranged from “Well, women just aren’t interested in politics” (FALSE) to, “If Hillary Clinton wins, I’ll see you all in Canada!” to “Think about what would happen when Aunt Flow comes to town!”

Yes, because every woman would be so emotionally unbalanced during her period days that she would no doubt get mad at some country for a minor slight and end up starting a war.

As silly as some of these sound, they reflect a long-running and deep-set opinion that women are somehow unfit to hold public office. We still see the disconnect between male leaders being “powerful” or “strict” to female leaders being “bitchy” or “emotional.” As Rep. Pelosi so sagely put: “All of it is about one word, and that is respect.“

Look at it this way. On the Forbes list of most powerful women, American politics are hardly represented. Rep. Pelosi shows up, as she should, along with former Secretary of State Hillary Rodham Clinton and First Lady Michelle Obama.

Whether you agree with them or not, all three of these women have been fundamental in promoting women’s health and equality. It should also be noted that all three are part of the Democratic Party. There are definitely women who hold office as conservatives, but in a party notorious for blocking women’s rights, they cannot hope to rise very far.

Many other American women on the list are part of the entertainment, technology, or business industries, and foreign women in politics, including German Chancellor Angela Merkel who ranked number one, outrank American women across the board. Does this show that other countries, especially those in Europe, have a higher respect for women? Absolutely.

Disrespect for female leaders runs deep in American politics, but as those like Pelosi, Clinton, and Obama show, it is possible and necessary for women to keep fighting that disrespect. Our goal should be equality, because without it we will always be considered the lesser sex.

Morgan McMurray (@mcflurrybatman) is a freelance copywriter and blogger based in Savannah, Georgia. She spends her time writing, reading, and attempting to dance gracefully. She has also been known to binge-watch Netflix while knitting scarves.