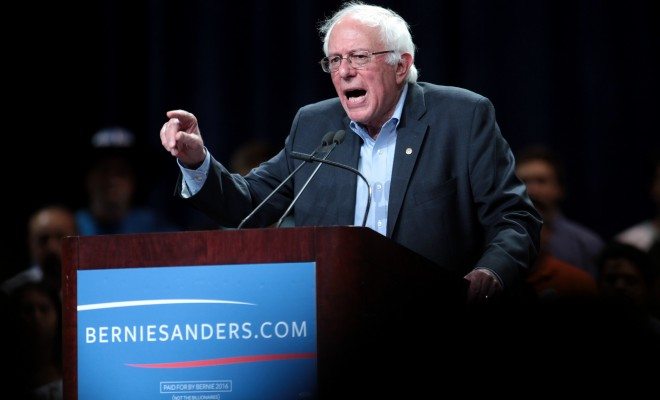 Trump: Maybe I should start focusing on ‘Crazy Bernie’

This past Tuesday, Bernie Sanders declared victory against Hillary Clinton in the West Virginia primary and caught the eye of the one and only GOP frontrunner, Donald Trump. In tweets commenting on the West Virginia and Nebraska primaries, Trump finally gave Bernie Sanders a nickname: ‘Crazy Bernie.’ But that’s a pretty weak moniker compared to the names he’s given to his other opponents like ‘Lyin’ Ted’ and ‘Crooked Hillary.’ In any case, now that Trump has finally “called” him out, does this mean ‘Crazy Bernie’ has been invited to play ball with the big boys?

I don’t want to hit Crazy Bernie Sanders too hard yet because I love watching what he is doing to Crooked Hillary. His time will come!

The Internet Has Spoken: Donald Trump is Worse Than Nickelback

A recent poll shows that Donald Trump is more hated than alt-rock band Nickelback, which has got to be one of the the craziest developments of the 21st century. Because, you know, the internet hates Nickelback.

RT this or donald trump will appear in your bedroom tonight naked and belting the song “far away” by nickelback pic.twitter.com/cfgc2xJwuC

But it seems Donald Trump is way less popular, despite being the GOP frontrunner.

Some airplane pilots are mothers too, but Frontier Airlines doesn’t quite seem to get that. Four female pilots for the airline filed formal complaints with the help of the ACLU, claiming its policies do not accommodate pregnant and nursing mothers, making it difficult for the employees to work AND provide for their families. Should career women have to choose?

Coming May 23, Budweiser will be renaming its popular brew “America” for the summer. You may be wondering, is this a publicity stunt? Well, yeah! Plus what’s more American than a patriotic beer that literally says America for us all to imbibe during the craziest presidential race ever? Some say it’s a risky effort for the brand as it may alienate some people. Which makes sense, because the announcement has since attracted the King Alienator Donald Trump, who takes credit for the label change. But we’ll see what good the new beer name will do him come November.

Fans of Harry Potter, the Lord of the Rings, and other fantasy series are pretty incensed after a school principal in the UK wrote a now-viral letter about how reading popular fantasy books “can damage the sensitive subconscious brains of young children, many of whom may be added to the current statistics of mentally ill young children.”

Obviously, that’s ridiculous. Or, if we treat the fun-hating principal like a Boggart just trying to scare us: riddikulus.