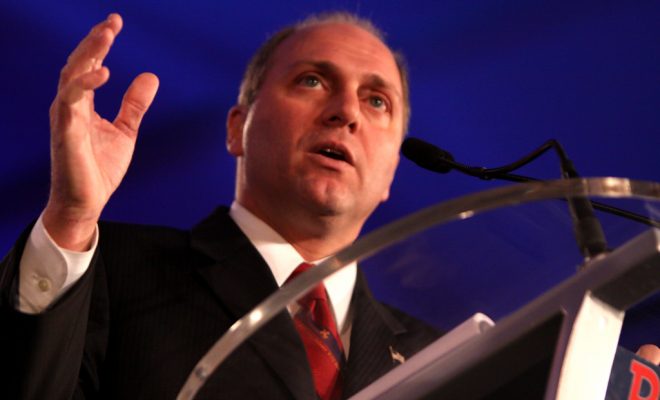 This morning, a gunman armed with a rifle opened fire at a baseball field in Alexandria, Virginia, where the Republican congressional baseball team was practicing. The House Majority Whip Steve Scalise and at least four others were injured–including one congressional aide and two law enforcement officers. Reportedly, the gunman, who has been identified as James T. Hodgkinson, was standing outside the fence and aimed at the only exit. He fired multiple shots, at least 50, according to eyewitnesses. Bullets also hit a nearby YMCA.

Active shooter situation during this mornings trip to the Y. Terrifying. Am ok. Sheltered in place & under lockdown. pic.twitter.com/iJs6fZpjiK

Scalise was shot in the hip and is in stable condition. Capitol police officers were right there and shot the gunman, who was wounded and taken to the hospital. “Nobody would have survived without the Capitol Hill police. It would have been a massacre without them,” said Kentucky Senator Rand Paul.

Congressional baseball field shooting went on for 10 minutes. @SenRandPauI says w/out police presence would be “killing field” “a massacre”

According to a press conference held by President Donald Trump, the shooter has died as a result of his injuries.

Emma Von Zeipel
Emma Von Zeipel is a staff writer at Law Street Media. She is originally from one of the islands of Stockholm, Sweden. After working for Democratic Voice of Burma in Thailand, she ended up in New York City. She has a BA in journalism from Stockholm University and is passionate about human rights, good books, horses, and European chocolate. Contact Emma at EVonZeipel@LawStreetMedia.com.
Share:
Related ItemsBaseballBeesCapitolCongressional BaseballGOPJeff SessionsReportsVox