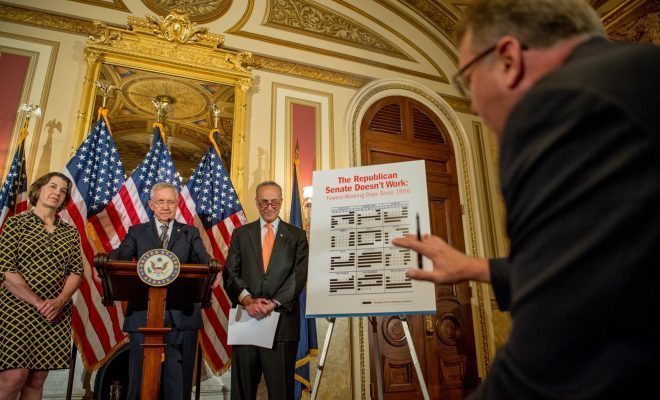 While Zika virus threatens to become more widespread in the U.S. this summer, partisan bickering in Congress has left the country ill-equipped to handle the impending public health issue. According to the New York Times, Senate Democrats shot down a bill for emergency aid for Zika virus on Tuesday, claiming that Republicans added in “politically charged provisions.”

The bill would have allotted $1.1 billion to help fight the virus, but it included provisions that had little-to-no direct relation to Zika funding. The provisions included: a restriction of funding to family planning clinics, a reversal on the ban on confederate flags in federal cemeteries, and a loosening of EPA restrictions,  along with others. This forced Democrats to shut it down despite its urgency.

The heated exchange on the Senate floor, during which our country’s elected officials flung around insults like immature children (see: Majority Whip John Cornyn (R-NY) calling the Democrats “sore losers“), just reinforced the popular stereotype of an ineffective Congress plagued by partisan gridlock.

With the impending Fourth of July holiday and a seven-week recess scheduled to begin at the end of July, there’s a decent chance that there won’t be another vote until September.

Democrats criticized Republicans for the provisions, while Republicans claimed that Democrats would be responsible for a Zika outbreak.

I didn’t think the GOP could write 1 bill to hurt women, vets, Obamacare, PP, AND clean water all at once – but they did it. #Zika

Believe it or not, the GOP Zika bill reverses the ban on flying the confederate flag at military cemeteries. Really! Idiotic.

Lara was born with microcephaly due to Zika virus. How many more will suffer before Senate Ds and WH allow funding? pic.twitter.com/jMSYEeIuZj

Senate Dems are making up excuses to justify voting against this bill, which provides $1.1 billion to fight #Zika. https://t.co/qwC88nqBsv

While senators continue to play the blame game, the blocking of this funding could be potentially dire, as Zika virus threatens to become a public health emergency in the U.S. On Tuesday, the first baby with Zika-related microcephaly was born in Florida. So far, there have been 935 reported cases of Zika in the United States, according to the CDC. The virus, which is primarily transmitted through mosquitoes but can also be transmitted sexually, is expected to become more prevalent throughout the country this summer.

Hopefully the Senate can unite to take necessary action on Zika; meanwhile, instances such as this one just feed the anti-establishmentarian attitudes that are currently pervasive on both sides of the political spectrum.

Mariam Jaffery
Mariam was an Executive Assistant at Law Street Media and a native of Northern Virginia. She has a B.A. in International Affairs with a minor in Business Administration from George Washington University. Contact Mariam at mjaffery@lawstreetmedia.com.
Share:
Related ItemsCongressSenateU.S. CongressU.S. SenateZikaZika Virus