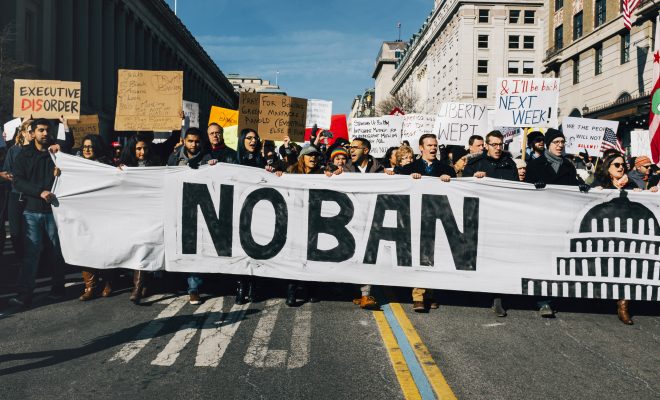 Over a two-hour period on Monday, a federal appeals court in Richmond heard arguments on a case concerning President Donald Trump’s revised travel ban, issued via executive order in March. The 13-judge panel was split between those who argued that Trump’s order should be examined on its merits and text, and others who contended that the directive should be viewed in the context of the president’s past statements on Muslim immigration.

The hearing, which was the first test for Trump’s contentious executive order in a federal appellate court, saw arguments from Jeffrey Wall, the acting solicitor general of the U.S. who defended the government’s position, and Omar Jadwat, a lawyer from the ACLU representing the plaintiffs. The fact that 13 judges heard arguments–in a court that usually consists of a three-judge panel–indicates the weight that this case holds.

Questions over how the travel ban should be viewed–either by its merits or in light of Trump’s public statements–were generally split between the Democratic-appointed judges and the Republican-appointed ones. Judge Robert King, appointed by President Bill Clinton, said Trump has “never repudiated what he said about the Muslim ban,” alluding to Trump’s calls for a freeze on Muslim immigration during the campaign.

Judge Pamela Harris, appointed by President Barack Obama, likewise read the travel ban as an anti-Muslim missive. The ban “has a disparate impact on Muslims,” she said. But Judge Paul Niemeyer, appointed by President George H.W. Bush, questioned the wisdom of reading too much into past statements. “Can we look at his college speeches?” he asked. “How about his speeches to businessmen 20 years ago?” He added: “I just don’t know where this stops.”

Wall, representing the Trump Administration in the hearing, said Trump’s past statements do not indicate any motives beyond the text of the order. That is, that it’s a national security measure. “Candidates talk about things on the campaign trail all the time,” he said. Wall also denied the charge that the ban is effectively a Muslim ban. “This is not a Muslim ban” he said. “It has nothing to do with religion. Its operation has nothing to do with religion.”

Trump’s revised March order banned travel for 90 days from six countries in the Middle East and North Africa: Somalia, Iran, Syria, Libya, Sudan, and Yemen. It also froze admittance of refugees for 120 days, and dropped the number of refugees allowed to enter the U.S. from 120,000 to 50,000. Two federal judges, one in Maryland and one in Hawaii, blocked parts of Trump’s order in March.

Monday’s hearing at the U.S. Court of Appeals for the Fourth Circuit is an appeal of the Maryland ruling. Next Monday, a federal appeals court in Seattle will review an appeal of the Hawaii ruling. Ultimately, regardless of how the judges in Richmond rule, the case is likely to end up at the Supreme Court.