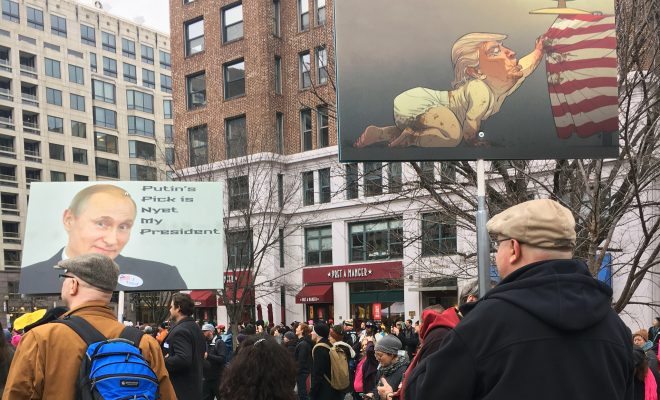 After Syrian Strike, the U.S.-Russia Relationship Hits a Low Point

What started as a baffling and unconventional bromance between President Donald Trump and Russian President Vladimir Putin is quickly resembling the U.S.-Russia relationship of the past few administrations. Not so long ago, Trump was praising Putin as a stronger leader than former President Barack Obama. He once expressed hope the two could be best friends. His associates–and Trump himself–are under investigation for possible collusion with the Kremlin’s meddling in the 2016 election.

But all that good will has been unraveling over the past few weeks, accelerated by the chemical weapons attack in Syria on April 4. Russia is a key patron of Syrian President Bashar al-Assad, who Defense Secretary Jim Mattis said “no doubt” carried out the chemical strike on the town of Khan Shaykhun, killing up to 100 civilians. Since the strike, and the subsequent U.S. military response of striking a Syrian air base with 59 cruise missiles, Moscow and Washington have been engaged in a rhetorical cold war of sorts.

Russia has not only denied prior knowledge of the chemical attack, but has also claimed the strike was carried out by “terrorists”–its blanket classification of all opposition forces–to frame the Syrian regime. In a declassified dossier released on Tuesday, U.S. officials said Syria and Russia “have sought to confuse the world community about who is responsible for using chemical weapons against the Syrian people.” The four-page report, largely dedicated to refuting the Kremlin’s denial, continued:

Russia’s allegations fit with a pattern of deflecting blame from the [Syrian] regime and attempting to undermine the credibility of its opponents. Russia and Syria, in multiple instances since mid-2016, have blamed the opposition for chemical use in attacks. Yet similar to the Russian narrative for the attack on Khan Shaykhun, most Russian allegations have lacked specific or credible information.

Has the chemical attack ended Trump’s stated intentions of building a closer relationship with Russia, in hopes of defeating Islamic State? In spite of the suggestions that Trump is a “Putin puppet” or has unusually kind words for Putin because he knowingly was propped up by Russia’s hacking efforts, the relationship is in danger of deteriorating. On Tuesday, Putin compared the U.S.’s retaliatory strike to the 2003 invasion of Iraq.

“To my mind, this strongly resembles what happened in 2003 when representatives of the United States showed in the Security Council what was supposed to be chemical weapons found in Iraq,” Putin said. Using a common acronym for ISIS, he added: “A military campaign in Iraq ensued, and it ended in devastation of the country, growth of the terror threat and emergence of ISIL on the international scene.”

But Secretary of State Rex Tillerson, after being led to believe he would not be granted a private meeting with Putin, will be meeting with the Russian president after all. On Tuesday, at a G-7 meeting in Italy, Tillerson admonished Russia for its failure to fully rid the Syrian government’s chemical weapons stock in 2013, which it pledged to do in a deal with the Obama Administration.

He said Russia was either incompetent in disposing of the chemical weapons, or complicit in allowing the regime to maintain a cache. “But this distinction doesn’t much matter to the dead,” Tillerson said. “We can’t let this happen again.” And in a Wednesday morning interview with Fox, Trump said referring to Russia’s support of Assad: “Putin is backing a person that’s truly an evil person, and I think it’s very bad for Russia, I think it’s very bad for mankind, it’s very bad for this world.”