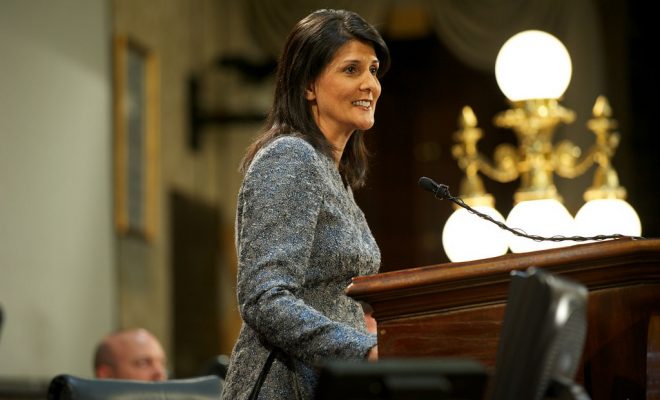 The Trump Cabinet: Who is Nikki Haley?

As recently as October, she expressed her distaste for President-elect Donald Trump, saying she would vote for him, but is “not a fan.” But on Wednesday, Trump announced Governor Nikki Haley (R-SC) will serve in his cabinet as the U.S. ambassador to the United Nations, succeeding President Obama’s appointee, Samantha Power. The daughter of immigrants from India’s Punjab region, Haley is the first Indian-American to serve in a presidential cabinet.

Though Haley, 44, and Trump often sparred during the primary season, the two will now be working together. In a statement on Wednesday morning, Trump said his new cabinet appointment has “a proven track record of bringing people together regardless of background or party affiliation to move critical policies forward for the betterment of her state and our country.” However, Haley has less of a track record in regard to foreign policy.

As U.S. Ambassador to the U.N., Haley will have a heavy influence in shaping and resolving international decrees and disputes. Though she has little foreign policy experience, Haley did travel abroad as governor several times to attract foreign businesses to her state.

Despite her lack of a deep resume in the foreign policy realm, and the vitriol she often expressed for Trump during the campaign, Haley cited a “sense of duty” in a statement on her new assignment. She added: “When the president believes you have a major contribution to make to the welfare of our nation, and to our nation’s standing in the world, that is a calling that is important to heed.”

Haley became the first female, and minority, governor of South Carolina when she was elected in 2010. She made national headlines in 2015, when she called on the statehouse to remove the Confederate flag from its premises after a white gunman killed nine people at a historic black church in Charleston and used the flag as a motif of his twisted ideology. The flag was removed.

Haley, whose birth name is Nimrata Randhawa (her parents sometimes called her “Nikki,” meaning “small one” in Hindi), and Trump consistently expressed mutual dislike during the primary campaign, in which Haley supported Senator Marco Rubio of Florida. During her Republican rebuttal to President Obama’s State of the Union address in January, Haley dismissed Trump’s fiery rhetoric.

“Some people think that you have to be the loudest voice in the room to make a difference,” she said. “That is just not true. Often, the best thing we can do is turn down the volume.” Trump responded by saying Haley is “very, very weak on illegal immigration.” All that is in the past now, apparently, and both Trump and Haley seem ready to move on from past barbs and into a new era of cooperation.

While awaiting the Senate’s confirmation of her appointment, Haley will continue serving out her second term as governor. Lt. Gov. Henry McMaster, an early Trump supporter, will take over as governor should Haley be confirmed.