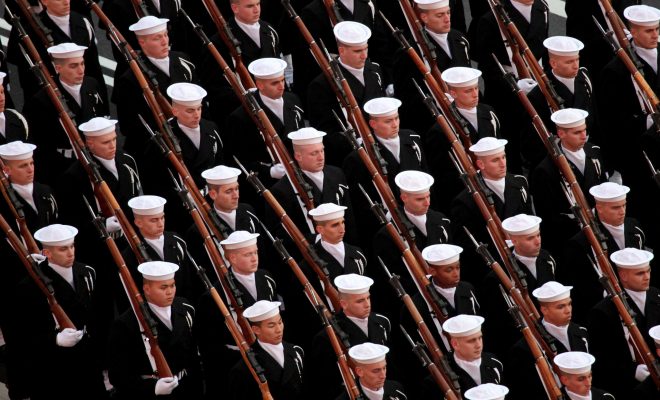 President Donald Trump is preparing to submit a budget proposal for the coming fiscal year that would increase military spending by $54 billion, a 10 percent spike, according to an administration official. To offset the increase, a similar amount would need to be shaved from other programs and agencies, like the Environmental Protection Agency and the State Department.

“This budget follows through on my promise to focus on keeping Americans safe,” Trump said during a meeting with governors on Monday. The president said that the budget will include “a historic increase in defense spending to rebuild the depleted military of the United States.” He added that the budget will send a “message to the world, in these dangerous times, of American strength, security, and resolve.”

While a final budget will not be set for at least a few months, Trump’s wish list sets the tone for how he plans to spend the government’s money during his first year in office. It also seems to send the message that he is doing what he said he would: pare down a bloated government, while increasing military spending.

“We have to start winning wars again–when I was young, in high school and college, people used to say ‘we haven’t lost a war’–we never lost a war– you remember,” Trump said at the governors meeting. “We either got to win, or don’t fight it at all.”

The administration official, who talked to reporters on the condition of anonymity, said foreign aid would see massive reductions in funding. Foreign aid, which is often tied to security concerns that could ultimately affect the U.S., takes up one of the slimmest slices of the federal budget.

On Tuesday evening, Trump is expected to discuss his budget proposals to a televised joint session of Congress. In the months ahead, the initial budget request will get hemmed and altered by Republicans in Congress. Democrats are expected to staunchly oppose certain proposals, such as the proposed cuts to the EPA.

Senate Minority Leader Chuck Schumer (D-New York) said the additional $54 billion in military spending “almost certainly means cuts to agencies that protect consumers from Wall Street excess and protect clean air and water.” House Minority Leader Nancy Pelosi (D-California) said the cuts will have “far-reaching and long-lasting damage to our ability to meet the needs of the American people and win the jobs of the future.”

But Trump sees his proposal as him cashing in on a campaign promise to increase the bang of America’s buck. “We are going to do more with less and make the government lean and accountable to the people,” he said during a White House address preceding his meeting with the governors. “We can do so much more with the money we spend.”