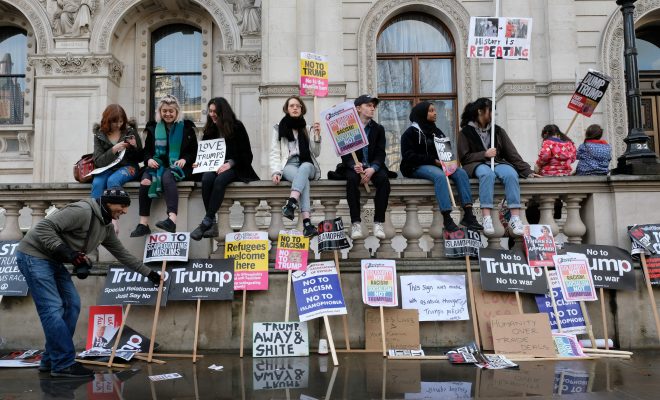 Trump Believes Obama is Behind the Protests and White House Leaks

In an interview on “Fox and Friends” on Tuesday, President Donald Trump accused former President Barack Obama of being the brain behind recent protests against Trump, and leaks from the White House. In the segment, Trump was asked whether he believed Obama was behind the incidents, including the rowdy town halls that many Republican lawmakers have recently faced.

“I think he is behind it. I also think it’s politics,” Trump answered. He has previously tweeted that “the so-called angry crowds in home districts of some Republicans are actually, in numerous cases, planned out by liberal activists.” On Tuesday he added that he thinks Obama’s “people are certainly behind it,” and also responsible for leaks from the government that “are really very serious leaks, because they’re very bad in terms of national security.” He didn’t explain how or why Obama would be leaking information from the White House, but people on Twitter had some theories.

Yes, Obama is behind all the leaks, which he saw in visions of the future before leaving, and left on post-it notes for WH staff to find.

Others simply wanted an explanation.

Can someone explain how Obama is behind townhall attendance/leaks? If Trump can’t explain he needs to be removed for mental health issues.

Trump on WH leaks: “I think that President Obama’s behind it because his people are certainly behind it.”

In the Fox interview, Trump also touched on his budget plan, which proposes a big increase in spending on the military but significant cuts in other areas, like EPA funding. He said it would be financed through a “revved-up economy” that is supposedly forthcoming. Also, he said the U.S. will “do things with other countries” and later ask for reimbursement, like assisting with military services.

Trump has decided not to attend the annual White House Correspondents’ Dinner, since members of the media just “make stories up.” It would be inappropriate for him to go to the dinner “in light of the fact of fake news,” he said. The “Fox and Friends” hosts even asked the president to give himself a grade based on his performance so far. He gave himself an A for achievement, but only a C for his ability to get his message out to the people.

Trump will address Congress for the first time on Tuesday night, and at least one Democrat has said he will not greet Trump when he enters the House floor. Representative Eliot L. Engel has shaken the president’s hand at every presidential address to Congress for almost 30 years, but said he will not do so this year, citing policy differences.

Emma Von Zeipel
Emma Von Zeipel is a staff writer at Law Street Media. She is originally from one of the islands of Stockholm, Sweden. After working for Democratic Voice of Burma in Thailand, she ended up in New York City. She has a BA in journalism from Stockholm University and is passionate about human rights, good books, horses, and European chocolate. Contact Emma at EVonZeipel@LawStreetMedia.com.
Share:
Related ItemsBarack ObamaCongressDonald TrumpFake NewsFox and FriendsLeaksPaid ProtestsProtesters