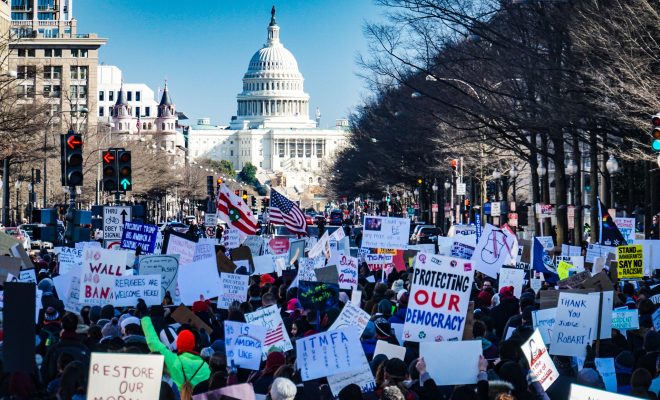 The Trump Administration is taking its fight to implement a controversial executive order halting travel from six largely Muslim countries for 120 days to the highest judicial level: the Supreme Court. Lower courts have blocked parts of President Donald Trump’s revised order–he scrapped a first attempt earlier this year after courts stopped it–over the past few weeks.

Trump’s harsh campaign rhetoric regarding Muslims, critics argued, revealed that his true motivation for instituting the ban was to stop Muslims from coming to the country. Trump has said the order–which blocked travel from Syria, Iran, Yemen, Libya, Sudan, and Somalia–is grounded in national security concerns.

In its brief, the administration argued:

The stakes are indisputably high: The court of appeals concluded that the president acted in bad faith with religious animus when, after consulting with three members of his cabinet, he placed a brief pause on entry from six countries that present heightened risks of terrorism. The court did not dispute that the president acted at the height of his powers in instituting [the order’s] temporary pause on entry by nationals from certain countries that sponsor or shelter terrorism.

The road to the Supreme Court has been seemingly inevitable. Trump crumpled up his first order, issued on January 27, after a federal appeals court in San Francisco blocked it in February.

The president issued a revised ban in March, which dropped the number of affected countries from seven to six (Iraq was removed), removed specific references to protecting Christian minorities, and allowed for a more case-by-case approach to determine which travelers are allowed into the country. Like the first order, it froze the refugee program for 120 days, and dropped the threshold of admitted refugees each year from 110,000 to 50,000.

If the High Court decides to take up the case, it will be an early test for Neil Gorsuch, the court’s newest justice. In his Senate confirmation hearing in March, Gorsuch barely budged when asked about his views on the travel ban. Referring to a previous comment from a senator that Gorsuch would likely preserve the ban, Gorsuch said: “He has no idea how I would rule in that case. And senator, I am not going to say anything here that would gave anybody any idea how I would rule.” When Sen. Patrick Leahy (D-VT) asked Gorsuch what he thought of banning other religions or citizens of entire countries, like Jews from Israel, Gorsuch replied:

We have a Constitution. And it does guarantee freedom to exercise. It also guarantees equal protection of the laws and a whole lot else besides, and the Supreme Court has held that due process rights extend even to undocumented persons in this country. I will apply the law faithfully and fearlessly and without regard to persons.