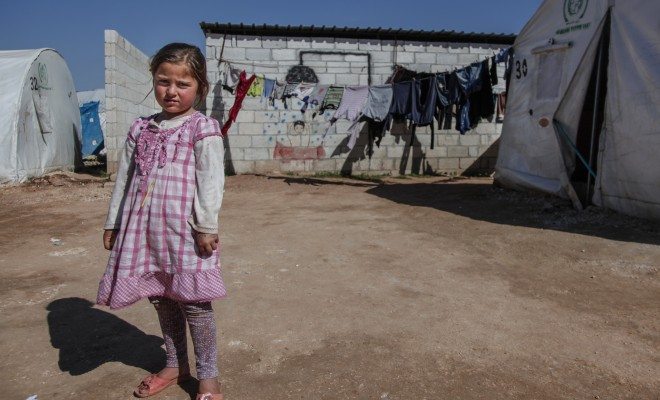 It’s true–the Syrian refugee crisis is a tough situation to handle. There are a lot of questions, few answers, and overall there’s a lot of work that needs to be done. But there have also been some truly horrifying responses from Republicans on the issue (and a Democrat as well), from state level politicians, to governors, to current presidential contenders. Check out the top five most terrifying Republican responses to the Syrian refugee crisis below:

Somewhat uniquely, Ted Cruz does say that he would let refugees in, but only if they are Christian. He backs up this startling show of intolerance by saying that it’s only Christians who are being persecuted by ISIS and in Syria.

Christians are being persecuted by ISIS, there’s no doubt about that. But so are Shiite Muslims, and so are Yazidis, and so are a whole bunch of other people. In fact, pretty much anyone who doesn’t agree with ISIS is being persecuted–and that includes a whole bunch of Muslims as well. There are a lot of other things wrong with Cruz’s plan when it comes to Syrian refugees as–including the fact that he’s used completely incorrect facts about the demographics of refugees in Europe–but blatantly mischaracterizing the situation in Syria is probably the worst.

David Vitter, who is currently running for governor of Louisiana (and losing) is now using total fear-mongering to attempt to get a bump in the polls. This week, the Louisiana Republican Party sent out an email and in support of Vitter, slamming Obama’s approach to dealing with the refugees, which Vitter tweeted about as well. The message was also posted on the LA GOP’s website. It read:

Just yesterday, David Vitter had to notify the Obama Administration that a Syrian refugee who had been living in Baton Rouge has gone missing. What kind of accountability is that? There is an unmonitored Syrian refugee who is walking around freely, and no one knows where he is.

Republicans also claimed that the refugee was “heading to Washington D.C.” Let’s just set the disgustingly xenophobic language aside, if only because it’s a common thread running through all of these examples, and point out that the Syrian refugee wasn’t actually ever “missing” or “unmonitored.” The Louisiana police knew exactly where the refugee was–he was moving to DC because his family lived there and had to fill out many, many forms in order to be able to do so, including filing paperwork with the federal government. Fantastic job, David Vitter.

While this one is only tangentially related–Trump actually calls for a complete refusal of Syrian refugees–it’s been worked into the overall debate enough I had to include it. Donald Trump, a man who is leading some Republican polls, said that he would support the creation of a registry with which to keep track of our nation’s Muslims. Although there’s been some arguments over what exactly he did mean–in one of the most damning clips he at one point appears to think he’s talking about border security–he didn’t flat out deny the proposal when asked a question about it, and that’s scary in and of itself. He was given the opportunity to clear up any confusion (if there was any) when asked how a registry of America’s Muslims would be different than the registration of Jews under Nazi Germany. But as the New York Times pointed out:

Asked later, as he signed autographs, how such a database would be different from Jews having to register in Nazi Germany, Mr. Trump repeatedly said, ‘You tell me,’ until he stopped responding to the question.

Here’s the full clip, if you want to watch for yourself:     Bonus points: Trump has also said that we have no choice but to close certain mosques earlier this week.

Ben Carson compared some refugees to “rabid dogs.” Do I even have to explain why this is offensive? Carson’s point–that we need good screening–is fine, but was there really a need to compare refugees to “mad dogs?” Not only is that dehumanizing, it implies that the refugees are diseased and have no autonomy over their own actions. But, what else can we expect from the man whose campaign is so messy that it actually misplaced New England earlier this week?

This is a fun one, because I get to highlight stupidity from multiple different people! Let’s start this with a history lesson: remember that time during World War II when we rounded up a bunch of Japanese-Americans and put them in internment camps? And if you paid attention in middle school, remember how we now view that a massive human rights failure and total usurpation of their Constitutional rights? Remember how in 1988 the Civil Liberties Act was signed, compensating those Japanese-Americans who were held in internment camps and offering a formal apology? Here’s what Ronald Reagan (the president who so rightfully signed that bill) said:

The legislation that I am about to sign provides for a restitution payment to each of the 60,000 surviving Japanese-Americans of the 120,000 who were relocated or detained. Yet no payment can make up for those lost years. So, what is most important in this bill has less to do with property than with honor. For here we admit a wrong; here we reaffirm our commitment as a nation to equal justice under the law.

Now, some people want to create similar camps for the Syrian refugees.

Let’s actually start with a Democrat–after all, ignorance and stupidity is certainly bipartisan: Roanoke Mayor David Bowers. After Virginia Governor Terry McAuliffe said that Virginia is open to refugees, Bowers called for all local government agencies to stop assisting refugees. He stated:

I’m reminded that President Franklin D. Roosevelt felt compelled to sequester Japanese foreign nationals after the bombing of Pearl Harbor, and it appears that the threat of harm to America from Isis now is just as real and serious as that from our enemies then.

So Bowers apparently missed history class. Who else?

State Senator Elaine Morgan of Rhode Island made a similar suggestion, saying that if we have to take refugees in: “we should set up refugee camp to keep them segregated from our populous.”

Sure–there’s also Tennessee GOP Caucus Chairman Glen Casada who suggested using the National Guard to round up any refugees allowed in Tennessee and sending them back to the ICE Detention Centers.

Great work all around–I’m super proud to be an American today.

Anneliese Mahoney
Anneliese Mahoney is Managing Editor at Law Street and a Connecticut transplant to Washington D.C. She has a Bachelor’s degree in International Affairs from the George Washington University, and a passion for law, politics, and social issues. Contact Anneliese at amahoney@LawStreetMedia.com.
Share:
Related ItemsBen CarsonDavid BowersDavid VitterDemocratDonald TrumpISILISISMulsimRepublicanSyrian RefugeesTed Cruz