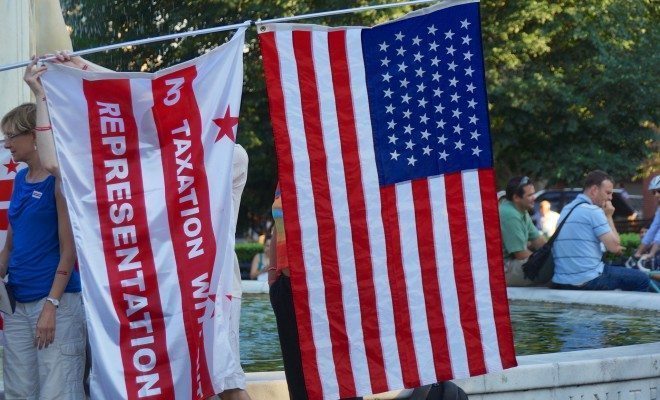 This summer, we will propose legislation that will put statehood on the ballot in the 2016 election. #DCEmancipationDay

In addition to her effort to put D.C. statehood on the ballot, Mayor Bowser is also finding other ways to challenge the federal government. For the first time since the district was created in 1790, the city will not be asking the federal government for approval of its annual tax-based budget. While this action may be a violation of the Constitution, it also sends a strong message to the federal government and the nation that D.C. is ready to be an independent state.

For years now, D.C. residents have been fighting for their right to representation in Congress. The desire for D.C. statehood hit an all-time high last fall, according to a survey conducted by the Washington Post. The survey found that three out of every four district residents claim to be upset because they do not have representation in Congress. Over seven in every 10 D.C. residents believe that Congress has too much control over the affairs of the district, especially considering we do not have a voting representative. Sixty-seven percent of D.C. residents said they would support a movement to make D.C. a state, with the hope that having representation would help the local government deal with city-wide problems.

The District of Columbia’s license plate exemplifies why people are mad that D.C. isn’t a state: taxation without representation.

John Oliver also did a piece on why D.C. should be a state last August, pointing out some of the ridiculous logic behind not giving the District of Columbia statehood.

This video highlights just how crazy it is for D.C. residents to pay taxes and abide by laws without any kind of representation in Congress. In addition, Oliver points out that not only is the D.C. population bigger than two states, but it also has a larger GDP than 16 of the 50 U.S. states. Not to mention the United States is the only country in the world with a capital that is isolated and lacking in representation the way D.C. is.

Even the Dali Lama questions D.C.’s lack of statehood, noting that he wonders why citizens in the city that is the “champion of democracy, liberty, and freedom” do not have full voting rights, lamenting that this problem is “Quite strange, quite strange.”

So, why isn’t the District of Columbia a state already? Well, the original thought process behind not granting the district statehood comes from a worry the founding fathers had that the proceedings of Congress could be disrupted by people living in the district. The founders were concerned that the national government would feel unnecessarily responsible for the people of the district because of their proximity to the government. There are some other arguments against statehood, including the lack of rural residents in D.C. as well as the fact that D.C. would be a stronghold for the Democratic Party.

In the eyes of most D.C. residents, myself included, those potential cons of statehood don’t really hold up when contrasted with the utter lack of representation that the district currently has. We deserve the right to Senators and Representatives as much as any other citizen in this country and, thanks to the dedicated work of Mayor Bowser and the rest of the D.C. government, that right may be granted to us soon. We’re rooting for you, D.C.

Read More: The 51st State: What D.C. Statehood Would Mean for the Country

Alexandra Simone
Alex Simone is an Editorial Senior Fellow at Law Street and a student at The George Washington University, studying Political Science. She is passionate about law and government, but also enjoys the finer things in life like watching crime dramas and enjoying a nice DC brunch. Contact Alex at ASimone@LawStreetmedia.com
Share:
Related Items51st StateCongressD.C.D.C. StatehoodMuriel E. BowserReferendumWashington