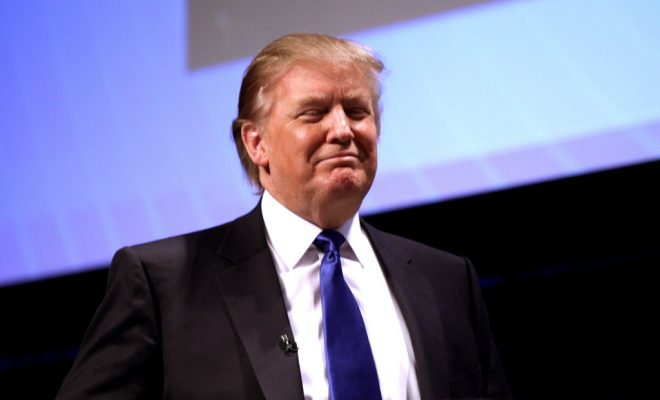 On Monday afternoon, a billionaire prescribed angry American workers a path to the middle class in a city the recession pummeled harder than pretty much any other. Donald Trump, the Republican presidential nominee, gave his most detailed speech on his economic plan yet, in front of protestors, supporters, and press at the Detroit Economic Club.

As protestors punctuated his hour long speech, in which he was introduced by his running mate Governor Mike Pence (R-IN), Trump aimed to shift the focus from his recent blunders to his beliefs on how America should move forward. Here is what you need to know about where Trump plans to steer the economy, with some fact-checking for good measure:

For one, Trump railed against the estate tax: “American workers have paid taxes their whole lives, and they should not be taxed again at death,” said the man who inherited undisclosed millions from his father. He promised to abolish the estate tax, which he said “is just plain wrong.”

Trump’s tax plan seemed to try to placate disillusioned low-income earners without completely ignoring those who are in the highest tax bracket. Private income, under Trump’s plan, would be taxed in three brackets: 12 percent, 25 percent, and 33 percent. “The rich will pay their fair share, but no one will pay so much that it destroys jobs or undermines our ability as a nation to compete,” he said, promising that many Americans–presumably those who earn below a certain threshold–would not pay any income taxes.

It’s no secret at this point that Trump throws falsehoods around often and enthusiastically. That’s not to say Clinton doesn’t do her share of fibbing, but per PolitiFact, an independent fact-checking website, the two are hardly in the same stratosphere: 53 (or 22 percent) of Clinton’s statements this campaign season have been completely true, while only nine of Trump’s (four percent) statements could be considered foolproof. His speech on Monday, though prepared, treated facts lightly at some points.

A touchstone of Trump’s success so far has been his stance on trade deals, namely that they are “terrible” and he’d “rip them up” if elected president. NAFTA, drafted by President George H.W. Bush and supported by Bill Clinton, is one of Trump’s go-to targets.

“According to the Bureau of Labor Statistics, before NAFTA went into effect there were 285,000 auto workers in Michigan. Today, that number is only 160,000 auto workers,” Trump said on Monday.

Auto manufacturing jobs have indeed been on a decline in America, especially in the “Motor City,” Detroit. But Trump implies NAFTA is the sole culprit of those job losses. The Congressional Research Service conducted a study in 2015 on NAFTA, and found that while certainly some auto industry jobs were lost to cheaper labor in Mexico, it’s also certain that many of the job losses can be explained by increased productivity due to technological advancements.

Here is how Trump framed the two options Americans will face in November: “She is the candidate of the past,” he said of Clinton. “Ours is the campaign of the future.” While they both are technically candidates of the present, Trump looked to portray Clinton and her platform as tired, worn out, and his own as bold, ready to “jump-start America.”

Again, some of his criticisms aimed at Clinton were related to trade. He mentioned her support for NAFTA and said she would likely support the Trans-Pacific Partnership–her official stance is against the TPP, but she did support it in the past–a 12-nation trade deal that is stalled in Congress at the moment.

Trump dismissed Clinton’s economic vision, which she will flesh out on Thursday, also in Detroit. Clinton, during a rally in St. Petersburg, Florida, shot back, saying his plan equated to a re-packaged version of Ronald Reagan’s trickle-down economics: “Now, you know that old saying, ‘Fool me once, shame on you, fool me twice, shame on me?'” she said. “Trickle down economics does not help our economy grow. It does not help the vast majority of Americans.”

With Clinton set to unveil her economic vision for America on Thursday, hopefully the focus will shift from lofty rhetoric to detailed ideas so voters can focus their energy on the things that matter.