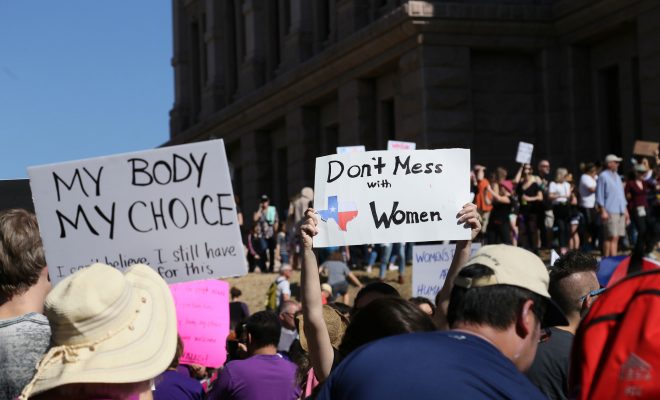 Farrar realizes that her bill, unfortunately, has very little chance of becoming law, but she said she hopes it will open up people’s minds–even though she admits this may be too much to ask of her fellow politicians. “What I would like to see is this make people stop and think,” she told The Texas Tribune. “Maybe my colleagues aren’t capable of that, but the people who voted for them, or the people that didn’t vote at all, I hope that it changes their mind and helps them to decide what the priorities are.”

Mirroring yet another law that currently affects women, the bill also calls for a 24-hour waiting period after a man’s first consultation for an elective vasectomy procedure or a Viagra prescription. This is a reality today for women seeking an abortion. Also, Farrar’s bill would require a rectal exam before a vasectomy or colonoscopy, even though it is not medically necessary. Today in Texas, women are required to have an ultrasound and listen to the heartbeat of the fetus before an abortion is performed, which is also medically unnecessary and, as Farrar says, “messes with women’s heads.”

It probably goes without saying that Farrar is an outspoken advocate for a woman’s right to choose abortion, and she has long fought against Texas legislation that restricts access to abortions. Lately, a lot of bills have been filed in the state targeting women’s reproductive rights. A bill by Rep. Tony Tinderholt goes as far as charging women who have an abortion, and their abortion providers, with murder. In a statement responding to the “Man’s Right to Know Act,” Tinderholt said, “I’m embarrassed for Representative Farrar,” and suggested that she take a biology class, obviously missing the point Farrar was trying to make.

Another bill by Rep. Byron Cook requires Texas hospitals to bury or cremate all fetal remains rather than disposing of them as biological waste. Texas is only one of many states with pending legislation like this. Advocates say it’s inhumane to “throw the bodies of human beings into a landfill.” Opponents say this is an ideological viewpoint that the state shouldn’t impose on women and that it could affect the access to abortion by imposing additional costs on clinics and hospitals.

As expected, many men and conservatives attacked Farrar and the bill on social media, claiming that she doesn’t know what she’s talking about. But most people got the joke and if the satirical bill could help people open their eyes to what women go through every day, that’s at least one step in the right direction.

Emma Von Zeipel
Emma Von Zeipel is a staff writer at Law Street Media. She is originally from one of the islands of Stockholm, Sweden. After working for Democratic Voice of Burma in Thailand, she ended up in New York City. She has a BA in journalism from Stockholm University and is passionate about human rights, good books, horses, and European chocolate. Contact Emma at EVonZeipel@LawStreetMedia.com.
Share:
Related ItemsAbortion RightsBillDemocratsJessica FarrarMasturbationReproduction RightsSatireState LawTexasTexas LegislatureViagraWomen's Rights