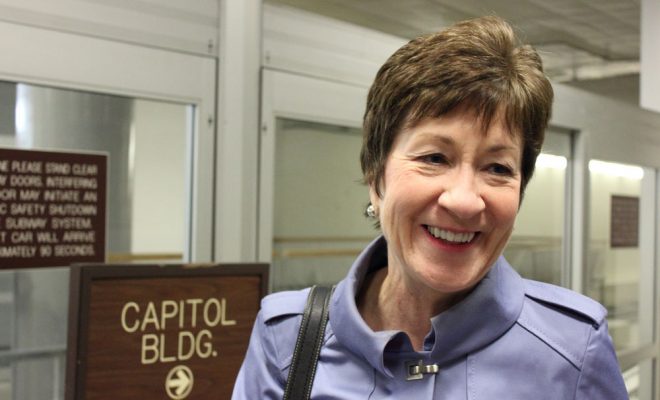 Senator Susan Collins (R-Maine) has crossed party lines before, and she says she will do it again–the politician announced that she would not support President Donald Trump’s pick to head the Environmental Protection Agency, Scott Pruitt.

Collins will not vote for Pruitt, the current Oklahoma Attorney General, at his confirmation hearing because of concerns over his numerous lawsuits against the EPA and potential impact on clean air in Maine. She is the only Republican to voice her opposition to Pruitt so far.

In a statement, Collins said that she supports EPA regulation of fossil fuel-powered plants to reduce air pollution:

The state of Maine, located at the end of our nation’s ‘air pollution tailpipe,’ is on the receiving end of pollution generated by coal-fired power plants in other states. Reducing harmful air pollutants is critical for public health, particularly for Maine which has among the highest rates of asthma in the country. Controls for mercury, one of the most persistent and dangerous pollutants, are especially important for children and pregnant women. Moreover, there is no doubt that the greenhouse gas emissions driving climate change pose a significant threat to our state’s economy and our natural resources, from our working forests, fishing, and agricultural industries, to tourism and recreation.

Pruitt, meanwhile has questioned the extent to which human activity has affected climate change. During his statewide campaigns, he also received money from donors with strong ties to fossil fuel industries.

This isn’t the first time Collins has opposed one of Trump’s cabinet picks before. Earlier this month, she and Lisa Murkowski (R-Alaska) were the only two Republican senators to vote against Secretary of Education Betsy DeVos.

Collins has a history of taking a more centrist approach to politics, particularly when it comes to social issues–her voting record has shown that she is mostly pro-choice and supports same-sex marriage.

During the election, she wrote in a Washington Post op-ed that she would not vote for Trump, and condemned his attacks on a disabled reporter, Mexican-American judge, and the parents of a soldier killed in Iraq.

When Trump announced an executive order at the end of January that would restrict immigration to the United States from seven Muslim-majority countries, Collins was one of a handful of Republican lawmakers to speak out against the ban.

She told the Maine Sun Journal at the time that the ban could hurt Iraqi citizens working with the U.S. military and that “religious tests serve no useful purpose in the immigration process.”

Because there is a 52-48 Republican majority in the Senate, more Republicans would need to cross the aisle to join Collins (assuming that the Democrats vote unanimously against Pruitt, which may not happen) and defeat his nomination. The Betsy DeVos vote last week came down to a 50-50 tie, with Vice President Mike Pence casting the final vote in her favor.

Victoria Sheridan
Victoria is an editorial intern at Law Street. She is a senior journalism major and French minor at George Washington University. She’s also an editor at GW’s student newspaper, The Hatchet. In her free time, she is either traveling or planning her next trip abroad. Contact Victoria at VSheridan@LawStreetMedia.com.
Share:
Related ItemsDonald TrumpEnvironmentEnvironmental Protection AgencyEPAMaineScott PruittSusan Collins