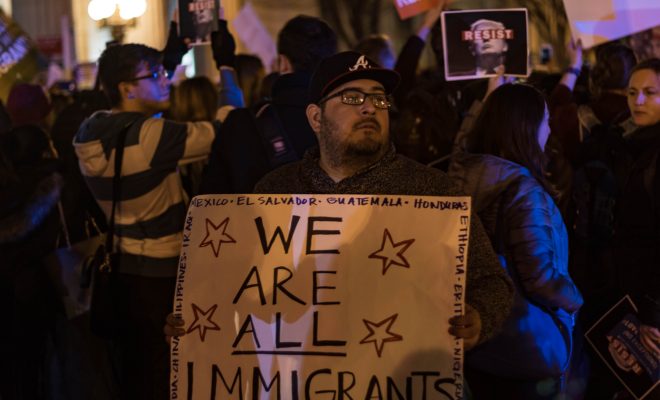 "We Are All Immigrants" Courtesy of MJWein: License (CC BY-ND 2.0)

The Story of Daniela Vargas: The “Dreamer” About to be Deported

By now, you’ve probably heard the story of Daniela Vargas, a 22-year-old woman who, at the age of seven, was brought to America by her family from Argentina on a visa waiver program. On Wednesday, the Huffington Post reported that Vargas, a Dreamer, was arrested by ICE agents immediately after she spoke about her father and brother, both of whom were detained by ICE agents because of their expired visas, at a news conference put together by immigration advocates in Jackson, Mississippi. Yesterday, the Huffington Post reported that her attorney said that Vargas was set to be deported without a court hearing because she entered the country using the visa waiver program, which abdicates an individual’s right to contest their removal.

Vargas is now being held at an ICE facility in Louisiana, and shared a message through her attorney that the Huffington Post has published: “I don’t understand why they don’t want me. I’m doing the best I can,” part of the statement reads. It continues:

There’s so much that I can bring to the table, so much, like I can even teach music, I’m an excellent trumpet player you can ask my mom about any of that.  I’m great with math, I speak Spanish. You know, there’s a lot of stuff that I can do for this country that they’re not allowing me to do. I’ve even tried to join the military, and I can’t do that. But, I mean that’s not the point, the whole point is that I would do anything for this country.

Her story has sparked outrage from many, and a petition started by the immigrant rights group United We Dream has collected almost 20,000 signatures. While there are many people on both sides of the argument, from people who are fuming at the injustice of the government’s treatment of Vargas to those who think an illegal immigrant is recklessly breaking the law, another perspective has emerged below the fold. It manages to walk the tight-rope between the two binaries and mixes performative empathy with a subtle “rules are rules” detachment. This perspective argues that this whole situation could have been prevented if Vargas had only managed her money better.

The reason why ICE has detained Vargas is because she is not technically a Dreamer with DACA status. According to the Huffington Post, Vargas’ DACA status expired in November and she only recently applied for DACA status again on February 10 because she was raising money for the $495 application fee that those under the reprieve of DACA are required to pay to renew their work permit.

Multiple immigration advocacy websites caution DACA recipients to be cognizant of their renewal dates and of the importance of saving up for the renewal fee. United We Dream recommends that one should renew their DACA status about five months before their status expires. The organization also outlines a variety of savings and fundraising advice for the renewal fee, as well as the opportunity for a fee exemption, though the chances of getting that exemption are very slim.

Some have pointed to Vargas’ inability to prioritize her DACA application fee as the reason why it is so hard for them to sympathize with her. Why didn’t she treat her payment with more urgency? Why doesn’t this 22-year-old have her priorities in order?

The $495 is a fee Vargas absolutely should have paid and planned for. Could she be characterized as mildly irresponsible for not paying this on time? Maybe. But according to the 2016 Consumer Financial Literacy Survey, one out of every five Americans do not pay their bills on time. The difference between these people and Vargas is that when they do have an overdue bill, a government official doesn’t show up to detain them and throw them in a detention facility to be deported.

A distinct freedom in America is the freedom to fail–the freedom to make a small mess and, as the saying goes, pull yourself up by your bootstraps and move on. This is a freedom that is not afforded to people like Vargas who were brought to this country with no choice. People who were raised as Americans and with the privileges that that identity allows, only to be brutally reminded when they reach adulthood that they are not Americans–that they are something else entirely, and every one of their failures is amplified to a dehumanizing degree.

Austin Elias-De Jesus
Austin is an editorial intern at Law Street Media. He is a junior at The George Washington University majoring in Political Communication. You can usually find him reading somewhere. If you can’t find him reading, he’s probably taking a walk. Contact Austin at Staff@Lawstreetmedia.com.
Share:
Related ItemsArgentinaDaniela VargasDHSICEIllegal ImmigrationImmigration