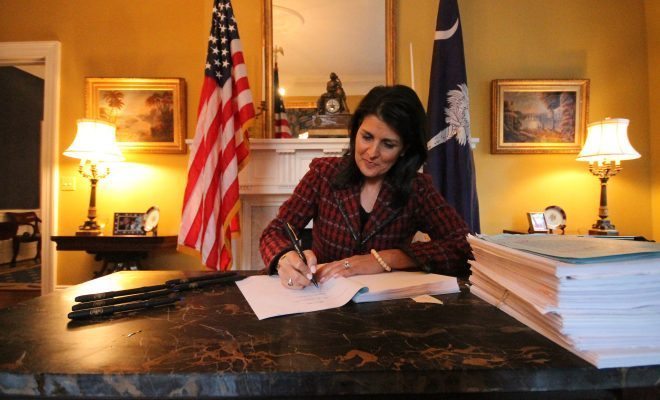 With the swish of her pen, Governor Nikki Haley (R-SC) made South Carolina the 13th state to outlaw abortions once a fetus reaches 20 weeks. There are no exceptions in the case of rape or incest, but the bill does allow for post-20 week abortions if the mother’s life is in danger or if the fetus is “incompatible with sustaining life after birth.”

“It is the purpose of the State to assert a compelling state interest in protecting the lives of unborn children from the stage at which substantial medical evidence indicates that they are capable of feeling pain,” reads the text of the bill, which was named the Pain-Capable Unborn Child Protection Act.

Reactions from the state’s General Assembly, which passed the bill on May 17, ranged from staunchly supportive to disappointed.

“I believe that an unborn child is human life and therefore I am compelled to be opposed to abortion except if the life of the mother is threatened,” said Senator Chip Campsen (R-Isle of Palms).

As for the “substantial medical evidence” that a fetus feels pain at 20 weeks, as cited in the bill’s language, studies over the last decade have supported both sides of the argument, and the topic is still highly controversial. For example, a 2005 study by the Journal of the American Medical Association (JAMA) concluded that a fetus does not experience pain until after the third trimester, or at 28 weeks into the pregnancy. The study was not without controversy, however, as two of its authors were found to have ties to pro-abortion groups. One was a lawyer for an abortion rights group, NARAL, for eight months in 1999, and another was a doctor who performs abortions and was the medical director of an abortion clinic.

In her testimony before the U.S. House of Representatives Judiciary Committee in 2012–involving a bill that would ban abortions at 20 weeks within the jurisdiction of Washington D.C.–Colleen A. Malloy, an assistant neonatal professor at Northwestern University Feinberg School of Medicine, presented her finding that fetuses do indeed feel pain prior to 20 weeks, stating:

As early as 8 weeks post-fertilization, face skin receptors appear. At 14 weeks, sensory fibers grow into the spinal cord and connect with the thalamus. At 13-16 weeks, monoamine fibers reach the cerebral cortex, so that by 17-20 weeks the thalamo-cortical relays penetrate the cortex.

But a representative of Charleston Women’s Health Medical Center, one of three abortion clinics in South Carolina, told Law Street that the bill would not have any effect on its practice, as the clinic only provides abortions up to the 13th week of pregnancy.

Last week, the American Congress of Obstetricians and Gynecologists, South Carolina Section sent a letter to Haley, urging her to veto the bill, which they saw as a “large step backward for our state”, stating: “Only a woman and her trusted doctors—not elected officials—should make decisions about her health.”

Alec Siegel
Alec Siegel is a staff writer at Law Street Media. When he’s not working at Law Street he’s either cooking a mediocre tofu dish or enjoying a run in the woods. His passions include: gooey chocolate chips, black coffee, mountains, the Animal Kingdom in general, and John Lennon. Baklava is his achilles heel. Contact Alec at ASiegel@LawStreetMedia.com.
Share:
Related ItemsAbortionNikki HaleyPro-ChoicePro-LifeSouth Carolina