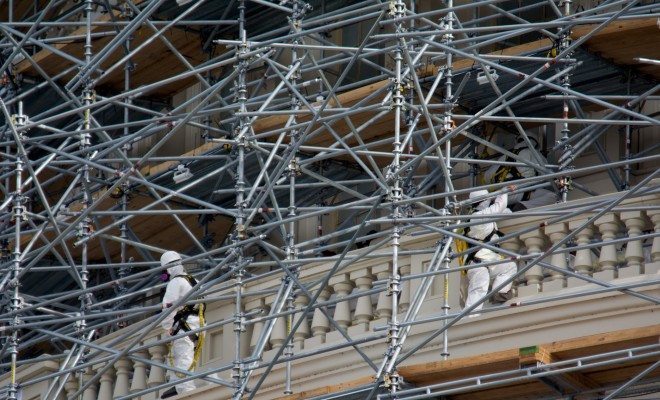 This is the second article in a two-part series about Lee Drutman’s plan for political reform. Click here to read the introduction. The first part looks at the debate between realism and reform and why Drutman sees his vision as the most practical approach.

In his recent paper, Lee Drutman outlines three specific areas of the government that are in dire need of reform–namely, elections, lobbying, and Congressional structure. While Drutman acknowledges that his reforms may not solve all of America’s problems, they provide an important starting point to help make the government more dynamic and capable of responding to new challenges. Read on to see an overview of his plans to fix government dysfunction and empower public interest policymaking.

Drutman’s most ambitious reforms focus on Congressional elections and policies that can help increase voter participation and decrease the barriers for new viewpoints to enter the mainstream. To do so, he calls for two specific changes: creating multimember districts and a small donor matching program.

Most campaign finance reform agendas focus on either overturning the Citizens United Supreme Court decision, which allowed unlimited political spending from corporations and interests groups in the form of Super Pacs and independent expenditures, or passing a constitutional amendment with the same goal, both of which are unlikely. Instead, Drutman argues that we shouldn’t focus on restricting influence, rather we should seek to make it more equal with donor matching. Not only will matching promote more contact between candidates and voters, it will lower the barriers for new candidates to run for office, no longer restricted to people with fundraising connections.

Drutman’s plan for small donor matching is based on a program implemented in New York City, where donations under a certain amount receive a 6-to-1 match using public funds. The goal of the program is to put the influence of small donors on the same level as wealthy donors and increase candidates’ communication with voters. In his paper, Drutman provides a powerful illustration of how matching could lead to change:

Under the current system, members of Congress know if they go to a lobbyist-hosted fundraiser, they can pull in $10,000—enough to make it worth their time. By contrast, under the matching proposal, if a constituent can get 30 friends to each pledge $50, that’s $1,500. Then, with the 6-to-1 match, that’s another $9,000, bringing the total up to $10,500—better than the D.C. fundraiser.

In doing so, candidates would be much more interested in actually spending time with voters rather than big donors, as the financial benefits would be much more similar. In fact, existing donor matching and public financing projects have had that effect. In research on New York’s matching program, the Brennan Center for Justice concluded,

While it is fair to criticize Drutman’s plan for not changing the role of Super Pacs and independent expenditures, which can take even larger donations, his plan would significantly impact campaign level fundraising.

The change to multimember districts is probably the most significant of Drutman’s proposed changes, but it could have a profound impact on political polarization. One of the biggest issues Drutman sees with our current electoral system is the fact that it has become largely uncompetitive–very few districts are contested in House elections and Senate elections, which involve voters across a state, are only marginally better. This leads him to conclude, “The United States is increasingly becoming two one-party nations, instead of a two-party nation,” meaning that both parties are largely safe within the areas that they currently control based on the natural placement of voters. There is little geographic overlap between voters in both parties.

Drutman’s idea of multimember districts is largely based on work from FairVote, a nonpartisan group seeking to increase the representativeness and fairness in American elections. According to FairVote, ranked choice voting for multi-winner elections would be an American form of proportional representation where any candidates who earn a minimum number of votes is elected. For voters, ranked choice voting is pretty simple–they rank as many candidates as they want in terms of their preference. Counting votes is a little more complicated, but it essentially ensures that all votes are properly distributed to pick the winners, eliminated wasted votes. For more details on the process behind it, you can watch Minnesota Public Radio’s explanatory video.

Much like his plans to help alleviate issues with campaign finance, Drutman argues that in order to reform lobbying and influence in politics, we need to empower citizens and general welfare organizations. He focuses on expanding the role and resources of these general-interest welfare groups by creating a similar 6-to-1 matching program for “citizen lobbying” organizations. Drutman cites the balance of spending on lobbying, which overwhelmingly comes from businesses and their trade associations. In fact, there are very few groups that represent a wide range of public interest issues.

Drutman’s matching program would help direct money to rebalance lobbying spending and ensure that businesses aren’t the only interests represented on certain issues. Drutman also calls public defender style system for lobbying where public lobbyists would lobby on behalf of underrepresented constituencies in order to ensure that multiple viewpoints are always heard. While his reforms to the lobbying system are arguably his vaguest proposals, the general goal of ensuring that business interests are not the only people at the table when it comes to lobbying could have a notable impact on public policy and, importantly, the public’s perception of political influence.

When it comes to Congress, Drutman sees two changes that would empower representatives to create new coalitions and develop better policies that serve the general welfare. First, Drutman would increase the funding available to Congressmen to pay their staff. On its face, this might seem like a ridiculous position–why would we simply want to pay staffers more money? But upon further review, Drutman argues that providing more resources to Congress is the best way to make it resist outside influence.

Drutman and Steve Teles wrote an article in Washington Monthly last year in which they introduced a new way to think about lobbying reform. The central idea behind this vision is, “Instead of trying to weaken the pressure of corporate money in Washington, let’s try strengthening Congress’s capacity to resist it.” By increasing staff salaries, Congress will lessen the influence of the so-called “revolving door,” where staffers work on Capitol Hill for a couple years and then move on to the more lucrative lobbying sector. As Drutman puts it, “Congress has become a farm league for K st.” But if staffers are able to earn more while working for Congress they will be less interested in going to work for big business.

Moreover, by limiting staff turnover and providing additional resources to policymakers, expert lobbyists will have less importance in the policy drafting process. Drutman, an expert on lobbying who wrote a book on the subject, argues that business of lobbying can often be misunderstood. Rather than simply providing campaign donations to Congressmen in order to get their desired policies enacted into law, the role of a lobbyist is more about providing expert advice to Congress. If Congress had more expertise of its own, the need for help from lobbyists would decrease significantly, particularly on arcane issues that directly impact big businesses. In a Q&A with Melinda Henneberger, the Editor-in-Cheif of Roll Call, Drutman laid out the alternatives:

Look, policy is going to get written–do you want it to be written by lobbiests who mostly represent the biggest companies and the wealtheist industries who are not particularly interested in the general welfare. Or do you want it written by staffers who work for democratically accountable members.

A prime example might be the case of financial regulation, where in certain cases lobbyists are essentially writing some of the legislation used the regulation the interests they represent.

Finally, Drutman says that Congress needs to be reorganized in order to prevent the top-down influence of the party leadership. He proposes a new way to decentralize power in Congress by empowering committees and subcommittees. Doing so would create new space for dealmaking and new crosscutting coalitions based on policy goals rather than partisanship. It will also encourage participation from a much wider range of representatives who could bring new viewpoints.

The major policy proposals endorsed by Drutman will clearly change the current state of politics, but it’s still worth questioning whether they will meet his ambitious goals of reducing political polarization and inequality. It is impossible to say for sure whether these policies will solve all of our problems in terms of equity and representation, and Drutman himself concedes that reforms are needed in other areas of the political system, but these policies make those goals more approachable. The underlying objective in each of Drutman’s reform proposals is to increase what he calls “political dynamism,” or the ability of Congress to effectively respond to new challenges with policies that promote the public interest.

Rather than espousing a utopian vision of politics or a narrowly tailored set of policy goals to restrict the outside influence, Drutman wants to realign policymaking to support common goals. He seeks to make government more accountable to each and every citizen while ensuring that Congress has the necessary expertise to govern effectively. So yes, it’s fair to question whether this will fix everything, but if the status quo is the alternative, taking steps to bring experts and the public into the policy process is certainly a laudable goal.