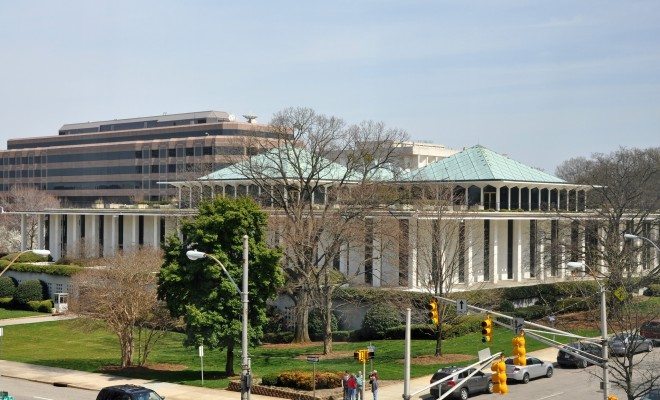 Democrats in the North Carolina state legislature have finally filed the repeal of HB2, the aptly named “bathroom bill,” that has been the center of attention nationwide for the past few weeks. All it took for them to get this repeal in order was, oh, I don’t know, the disapproval of Bruce Springsteen, Paypal, Cyndi Lauper, Ringo Starr, Pearl Jam, Mumford and Sons, Cirque du Soleil, and countless more people, groups, and companies.

After over a month since HB2 was passed, it seems like the anger about the bill is starting to get through to the dense legislature and seemingly oblivious Governor, Pat McCrory. Today, Equality NC delivered 190,000 signatures to the Governor’s office, calling for the repeal of HB2.

Thankfully, House Democrats responded by filing HB946, which is the repeal of HB2.

On the first morning of session, a bill has been filed to repeal HB2. pic.twitter.com/GPPxzN7Ob4

What this new bill will do is relieve any businesses whose policies were affected by the mandates in HB2 of their obligations to the bill. Essentially, policies won’t have to be changed in response to HB2 if the repeal is passed.

Some people in North Carolina, however, are in support of HB2 and have been protesting any kind of repeal, claiming that HB2 protects women and children in public restrooms.

The NC Values Coalition even hosted a rally in downtown Raleigh in support of the discriminatory bill, claiming to be standing up for traditional values.

If you’d like to see more infuriating tweets, feel free to search the hashtag “#StandWithNC” on Twitter to see some of the ridiculous arguments that proponents of HB2 are making–a large chunk of whom are white men purporting that this bill is the only way to protect women and children from dangerous instances of pedophilia.

If anyone needed more reasons to despise this bill, Ted Cruz has come out in favor of it this week in a speech in Indiana, saying:

So let me make things real simple: Even if Donald Trump dresses up as Hillary Clinton, he shouldn’t be using the girls’ restroom.

To be clear, Donald Trump dressing up as Hilary Clinton and a person being transgender are two totally different things. Cruz attacked Trump for his anti-HB2 opinions, saying that:

He joined them [liberals] in calling for grown men to be allowed to use little girls’ public restrooms. As the dad of young daughters, I dread what this will mean for our daughters—and for our sisters and our wives. It is a reckless policy that will endanger our loved ones.

What Cruz’s argument fails to realize is that the HB2 isn’t “protecting women and children” from grown men. It’s forcing people who identify with one gender to use the bathroom of another, for example, James Sheffield:

@PatMcCroryNC It's now the law for me to share a restroom with your wife. #HB2 #trans #NorthCarolina #shameonNC pic.twitter.com/4b4OdmfmeN

Under HB2 this man would be forced by law to use the women’s restroom. How do you feel about that Ted Cruz? Not to mention the fact that even Fox News acknowledges the fact that there are no instances of criminals using transgender protections in order to defend any kind of sexual harassment charges in public bathrooms. Neither groups on the left nor groups on the right have any evidence that any man has ever claimed to be transgender in order to disguise himself as a woman and sexually harass women, which is what HB2 supporters and Cruz are claiming will happen if HB2 is repealed.

At the end of the day, this law is discriminatory, and the people of North Carolina are getting fed up–myself included. Thanks to Democratic lawmakers, though, it’s looking like there is the possibility for a repeal in the near future. And, thank goodness, because it’s about time.

Alexandra Simone
Alex Simone is an Editorial Senior Fellow at Law Street and a student at The George Washington University, studying Political Science. She is passionate about law and government, but also enjoys the finer things in life like watching crime dramas and enjoying a nice DC brunch. Contact Alex at ASimone@LawStreetmedia.com
Share:
Related ItemsBoycottDemocratsHB2LGBTLGBTQNorth CarolinaTransgender