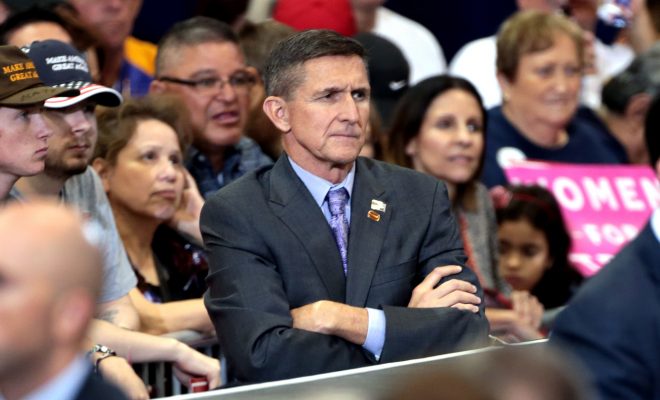 What You Need to Know About Michael Flynn’s Immunity Request

Former National Security Adviser Michael Flynn would testify in the House and Senate intelligence committees’ Russia investigations in exchange for immunity, his lawyer said in a statement on Thursday. Flynn “certainly has a story to tell,” said his lawyer, Robert Kelner, who added that his client is seeking immunity because of the “highly politicized, witch-hunt environment” of the investigations.

An immunity deal would protect Flynn against criminal charges, should it come to light that he broke the law. According to a U.S. official, the Senate Intelligence Committee, which is engaged in one of two congressional investigations of President Donald Trump and his advisers’ communications with Russia, denied Flynn’s immunity request. The House Intelligence Committee, which is running the second congressional investigation, has not responded as of Friday morning.

Flynn resigned in February after he misled White House officials, including Vice President Mike Pence, about the content of his communications with Russian Ambassador Sergey Kislyak. He has since become a central figure in the murky saga of Russia–which the FBI and CIA concluded meddled in the U.S. election in favor of President Donald Trump–and its communications with Trump aides during the campaign.

Congress has the ability to grant immunity, but usually consults a prosecutor first. The FBI is conducting a parallel investigation into Trump and his advisers’ ties to Russia, which director James Comey recently said has been underway since last July. The Justice Department has the power to delay–but not outright deny–an immunity request.

Kelner, Flynn’s lawyer, said in a statement, “no reasonable person, who has the benefit of advice from counsel, would submit to questioning in such a highly politicized, witch-hunt environment without assurances against unfair prosecution.” He added, somewhat cryptically: “General Flynn certainly has a story to tell, and he very much wants to tell it, should circumstances permit.” Trump, in a message on Twitter early Friday, encouraged Flynn to seek immunity:

Mike Flynn should ask for immunity in that this is a witch hunt (excuse for big election loss), by media & Dems, of historic proportion!

But an immunity request does not necessarily suggest Flynn is guilty of something worthy of criminal charges. “At this early stage, I wouldn’t read anything into this request beyond smart lawyering,” Mark Zaid, a lawyer who specializes in national security cases, told the New York Times. “In such a politically charged, high-profile national security case, I couldn’t imagine not first asking for immunity.”