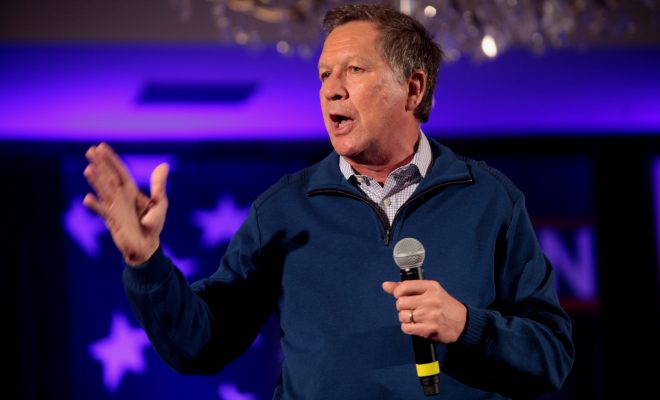 Ohio Governor John Kasich just vetoed a bill that would have limited the state’s renewable energy laws and made certain restrictions voluntary for two years. House Bill 554 was one of many bills that Kasich vetoed on Tuesday, along with one that would allow a $264 million tax break for the oil and gas industry.

The bill would affect rules that require electricity utilities to meet certain standards when it comes to environmental sustainability. These laws have already been frozen for two years, and if passed, House Bill 554 would have made it voluntary for companies to follow the standards. Instead, they will now go back into effect. Though the Republican-controlled House and Senate passed the bill, enough representatives voted against it that it could still be vetoed. But many disagreed with Kasich’s actions. Senator Bill Seitz (R-Cincinnati) who was in support of the bill, stated:

It is apparent that Gov. Kasich cares more about appeasing his coastal elite friends in the renewable-energy business than he does about the millions of Ohioans who decisively rejected this ideology when they voted for President-elect Trump.

Another Republican, Bill Coley, said requiring energy to be renewable is the same thing as forcing people to eat kale.

Kasich evidently not persuaded by State Senator’s argument that an RES is same as making people eat kale. https://t.co/pc0RYuRuW4

The renewable energy standards were frozen in 2014 because opponents criticized them as leading to increased costs for electric companies. A special committee was set up to come up with another solution, and concluded that the freeze should be indefinite. The House and Senate passed House Bill 554 earlier this month in response.

Kasich said in a statement about the veto that passing the bill would make Ohio less attractive for businesses that are likely to generate a lot of jobs in the near future, “such as high-technology firms.” Many tech companies put the environment and sustainability high on their list of priorities; for example Amazon has invested a lot of money in Ohio and supports renewable energy policies.

The GOP has called for two extra sessions on Wednesday and Thursday and might try to override the governor’s veto. They are expected to bring up the disputed so-called heartbeat abortion bill, which Kasich also vetoed.

Emma Von Zeipel
Emma Von Zeipel is a staff writer at Law Street Media. She is originally from one of the islands of Stockholm, Sweden. After working for Democratic Voice of Burma in Thailand, she ended up in New York City. She has a BA in journalism from Stockholm University and is passionate about human rights, good books, horses, and European chocolate. Contact Emma at EVonZeipel@LawStreetMedia.com.
Share:
Related ItemsElectricity CompaniesEnvironmentGOPHouse bill 554John KasichOhioRenewable EnergyRepublicansSustainability