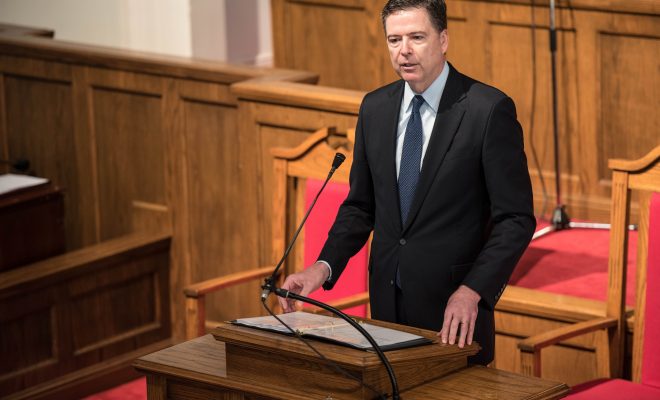 The House Intelligence Committee convened its first public hearing with FBI Director James Comey on Monday. Fielding questions from Rep. Devin Nunes (R-CA), the committee’s chairman, and Rep. Adam Schiff (D-CA), the ranking Democrat on the committee, Comey was reluctant to reveal anything too explosive. He did, however, reaffirm the Senate Intelligence Committee’s conclusions that, contrary to President Donald Trump’s tweets, there is no evidence that Trump Tower was bugged at any time during the campaign. Comey also said the bureau is actively investigating Russia’s election meddling, including any communications it had with Trump’s campaign associates.

No Evidence of a Wiretap

To hardly anyone’s surprise (except the president’s), Comey said there is “no information” to support Trump’s accusations that President Barack Obama had his de facto campaign headquarters, Trump Tower, wiretapped. “With respect to the president’s tweets about alleged wiretapping directed at him by the prior administration, I have no information that supports those tweets,” Comey said.

Last week, the Senate Intelligence Committee came to the same conclusion, even as Trump and his aides refused to lay the issue to rest. Sean Spicer, the White House press secretary, quoted a report from a Fox News reporter that suggested Obama colluded with GCHQ, the British spy agency, in bugging Trump Tower. GCHQ strongly rejected that claim, and Spicer reportedly met with the British ambassador to promise the unfounded claim would not be made again.

Confirming what many privately suspected, Comey said the FBI is actively investigating Russia’s role in hacking the emails of Democratic operatives during the campaign; a cohort of Trump’s current and former campaign aides are also being investigated for their Russian ties. What was a surprise to many observers of the hearing, however, was that the FBI has been probing the Trump campaign’s ties to Russia since July of last year, well before the Obama Administration announced the possible role Russia played in hacking the Democrats’ emails.

“Because it is an open, ongoing investigation and is classified, I cannot say more about what we are doing and whose conduct we are examining,” Comey said.

Trump, early Monday morning before the hearing, tried to deflect blame to his favorite target: Hillary Clinton. He tweeted:

The real story that Congress, the FBI and all others should be looking into is the leaking of Classified information. Must find leaker now!

The hearing showcased what Democrats and some Republicans perceive as the real issues at hand. For Democrats, it is the fact that an adversary intentionally hacked the U.S. political process, and what role the current administration might have played in that plot. Republicans at the hearing largely questioned the leaks that ultimately led to former National Security Adviser Michael Flynn’s resignation. The leaker, they seemed to imply, should be identified and punished.

“Unauthorized dissemination is punishable by felony up to 10 years in federal prison?” Rep. Trey Gowdy (R-SC) asked Comey, who responded: “Yes, as it should be.” But to Sen. Chuck Schumer (D-NY), the Senate minority leader, the most pressing issue facing the country is not the leaker, but the content of the leaks.

“The possibility of coordination between the Trump campaign and Russian officials is a serious, serious matter,” Schumer said after the hearing. “The investigation must be fair, independent, and impartial in every way, and the F.B.I. must be allowed to follow the facts wherever they may lead.”