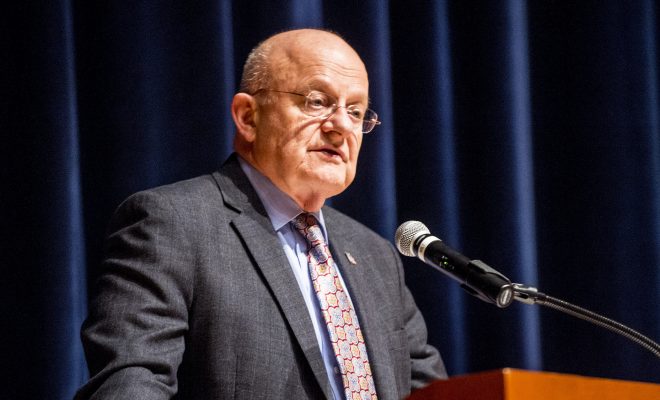 Senator John McCain (R-AZ), the chairman of the Senate Armed Services Committee, opened the hearing with a statement: “The goal of this review, as I understand it, is not to question the outcome of the presidential election. Nor should it be. As both President Obama and President-elect Trump have said, our nation must move forward. But we must do so with full knowledge of the facts.”

Clapper added: “Congress must set partisanship aside, follow the facts, and work together to devise comprehensive solutions to deter, defend against, and, when necessary, respond to foreign cyberattacks.” Since the CIA and the FBI concluded that Russia was the culprit behind the DNC hack, and in fact likely interfered with the aim of electing Trump, the president-elect has disputed those findings, and has seemed to place more trust in Russian President Vladimir Putin than U.S. intelligence.

Trump said the idea of Russia interfering in the presidential election on his behalf is “ridiculous.” Using his Twitter account as a megaphone, Trump has undermined the intelligence community’s findings, and has urged Congress to “move on.” Democrats and Republicans alike have expressed alarm at the Russian hack, and at Trump’s seeming ambivalence in responding to the cyberattack.

In a pair of tweets on Wednesday, Trump quoted Julian Assange, the founder of Wikileaks, who said Russia did not provide him with any hacked emails. “Julian Assange said ‘a 14 year old could have hacked Podesta’ – why was DNC so careless? Also said Russians did not give him the info!” Trump tweeted, referring to Hillary Clinton’s campaign manager John Podesta, whose emails were leaked in the weeks and months  leading up to Election Day. In Thursday’s hearing, Clapper was asked if Assange is a reliable source of information. “Not in my view,” he replied.

Last week, Obama responded to the Russian hack in a flurry of diplomatic moves. He ejected 35 Russian diplomats from the U.S., ordered the closure of two Russian-owned compounds in Maryland and Virginia, and slapped sanctions on a Russian intelligence agency. Trump has viewed the intelligence agencies’ conclusions, and the uproar from both parties, as a way to undermine his election victory.

Lindsey Graham, the outspoken Republican senator from South Carolina, addressed Trump directly as the hearing came to a close. “I want to let the president-elect to know that it’s okay to challenge the intel,” he said, “but what I don’t want you to do is undermine those who are serving our nation in this arena until you’re absolutely sure they need to be undermined.” Graham added: “The foundation of democracy is political parties, and when one political party is compromised all of us are compromised.”