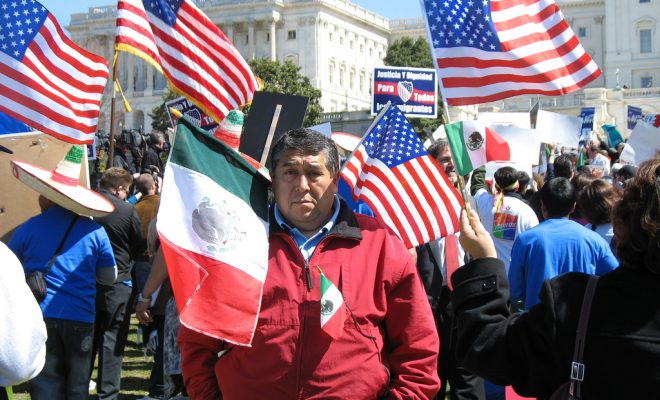 The Department of Homeland Security issued two memos on Tuesday, establishing harsher immigration enforcement when deporting undocumented immigrants. Taken together, the rules amount to a stricter interpretation of existing laws, and the expansion of others. The new guidelines also call for hiring more federal immigration officials, and erecting new detention facilities.

With last month’s executive order on illegal immigration and Tuesday’s memos, President Donald Trump seems to be following through with one of his principal campaign promises: cracking down on undocumented immigrants.

“The faithful execution of our immigration laws is best achieved by using all these statutory authorities to the greatest extent practicable,” DHS Secretary John Kelly wrote in one of the memos. “Accordingly, department personnel shall make full use of these authorities.”

White House Press Secretary Sean Spicer said on Tuesday that the rules were designed to “take the shackles off” immigration officers, and that “the number one priority is that people who pose a threat to our country are immediately dealt with.”

While President Barack Obama narrowly focused on deporting gang members, repeat criminal offenders, and high-level criminals who were in the country illegally (some dubbed him the “deporter in chief”), the new order essentially widens the scope of those who could be targeted for deportation by Immigration and Customs Enforcement, or ICE.

“ICE will not exempt classes or categories of removal aliens from potential enforcement,” said a fact sheet released by DHS on the order. “All of those present in violation of the immigration laws may be subject to immigration arrest, detention, and, if found removable by final order, removal from the United States.”

This effectively means that anyone found to have broken the federal immigration law–which is every undocumented immigrant living in the U.S.–is subject to being deported back to their home country. That does not mean this will happen, as there are roughly 11 million undocumented people living in the U.S., and there are not enough resources to deal with them all. But the new memos also call for more resources to help.

For one, the memos ask for an infusion of 10,000 new federal immigration officers. They also call for new detention facilities, and a new office within ICE to work with victims of crimes committed by undocumented immigrants. But it is unclear how the hiring increases and new infrastructure would be funded. In addition, Kelly told lawmakers on Capitol Hill earlier this month that more officers are not necessarily needed to strengthen security.

“I’d rather have fewer and make sure that they’re high-quality people,” he said. “I will not skimp on the training and the standards.” Regardless of whether ICE is able to hire thousands of new officers, it is expanding an existing program, known as 287(g), that uses local law enforcement officers as proxy federal immigration agents. Currently, 32 agencies across 16 states comply with the program; the new memos seek to expand the number of complying agencies. Between 2006 and 2013, the program resulted in about 175,000 deportations.

Instead of frightening 11 million undocumented people with deportation, we need comprehensive immigration reform and a path to citizenship.

“When you tell state and local police that their job is to do immigration enforcement,” Omar Jadwat, director of the ACLU’s Immigrants’ Rights Project told the New York Times, “it translates into the unwarranted and illegal targeting of people because of their race, because of their language, because of the color of their skin.”

One group that is seemingly safe from the heightened enforcement are undocumented children who were brought to the U.S. by their parents. Obama enacted a program, the Deferred Action for Childhood Arrivals, or DACA, which protects the undocumented children, or Dreamers. That program protected roughly 750,000 children. But under the new rules, their parents are at greater risk of being deported.

Alec Siegel
Alec Siegel is a staff writer at Law Street Media. When he’s not working at Law Street he’s either cooking a mediocre tofu dish or enjoying a run in the woods. His passions include: gooey chocolate chips, black coffee, mountains, the Animal Kingdom in general, and John Lennon. Baklava is his achilles heel. Contact Alec at ASiegel@LawStreetMedia.com.
Share:
Related ItemsDACADeportationDHSDREAMersICEImmigrationJohn Kelly