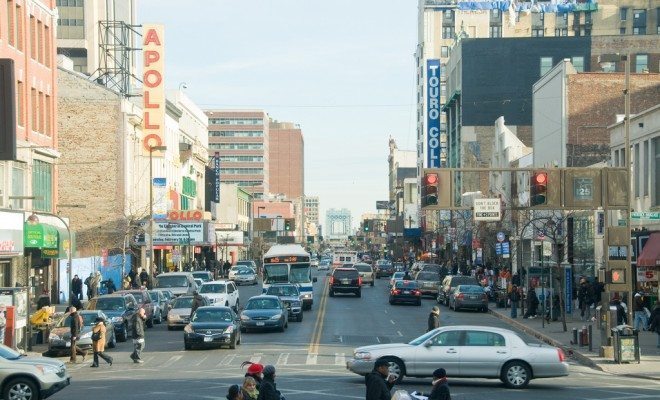 A Historic Congressional Race in Harlem: Technology is Key

The upcoming race for New York’s 13th Congressional District marks the first time that there’s an open seat to represent Harlem since WWII. Charlie Rangel has held the spot for years, and there’s a lot of history there–before Rangel was Adam Clayton Powell Jr., the first black man elected to Congress in New York and the fourth black Congressman in the United States. Powell was first elected back in 1947 and his son, Adam Clayton Powell IV, is one of the seven candidates vying for the open seat. But he’s not the only one vying for the seat in Harlem. Put simply: this is a race to watch.

The Democratic primary will be held on June 28; the winner will almost certainly go on to win the general election. The New York 13th district is one of the most solidly Democratic districts in the nation, with over 90 percent of the vote going to President Obama in each of the past two elections.

In a district that has seen just two representatives in almost 70 years, the Silicon Harlem debate was held last week on April 7 as the district shifts to meet the fast-changing demands for the 21st century. The debate was hosted by Silicon Harlem, a nonprofit organization seeking to reinvigorate Harlem by expanding technological innovation in the neighborhood. The organization started back in 2013 and has been working with local government officials and tech startups to bring new opportunities to the Harlem community. Silicon Harlem’s founder, Clayton Banks, kicked off the event by introducing Representative Rangel, the candidates, and the moderators, who were led by MSNBC’s Richard Lui.

When most people think about innovation they typically think of tech giants in California, but Harlem’s debate shows that innovation can be a plan for economic growth at a very local level. Harlem and its surrounding areas have been working for years to create a tech hub in Upper Manhattan. Under Mayor Bloomberg, the city embarked on a plan to provide free and fast internet to a 95-block area including Harlem, the largest plan in the country. While the candidates and the crowd expressed their dissatisfaction with the plan’s progress, the area has had several success stories when it comes to incubating new tech companies.

Silicon Harlem’s debate marks a further shift in that direction. The first ever technology-focused debate highlights the area’s larger plans for development in the area. It shows that the New York 13th District’s next representative will need to make technology a significant part of their campaign and that once elected, he or she will need to pursue policies and programs to foster growth both nationally and in the district. In a time when most politics feels so national, the Silicon Harlem debate refocused the conversation on the district itself.

At the debate, the candidates touched on topics ranging from the need for a stronger focus on STEM (science, technology, engineering, and math) education to the government’s role in regulating Uber. The central question was which policies will help spur growth in the district and what role should the government play in promoting local growth. The candidates all agreed that the government should be active, if not aggressive, when it comes to encouraging growth on the local level. But arguably its most important role is to expand access to new technology and high-speed internet. Closing the digital divide is of paramount importance when it comes to ensuring that everyone is able to benefit from new technology.

With seven candidates participating, the debate featured a range of experience and personality. Suzane Cook served as the Obama Administration’s Ambassador-at-Large for International Religious Freedom. Keith Wright and Guillermo Linares currently serve in the New York State Assembly and Adam Clayton Powell IV was an assemblyman from 2001 to 2010. Senator Adriano Espaillat currently serves much of the northern part of the 13th district in the state senate. Clyde Williams served as a Domestic Political Advisor for President Clinton and as the National Political Director for the Democratic National Committee. Mike Gallagher is a stay-at-home father of four who grew up in the community. He’s running because he feels that the district’s current representatives have failed their constituents.

Although much of the debate focused on positive policy proposals, there was an underlying fear that Harlem, Washington Heights, the northwest section of the Bronx, and the rest of the New York 13th district would not reap the benefits of the technological revolution. That, coupled with the feeling that both Congress and the local government have not done enough to ensure its development, created a sense of urgency for those on stage.

State Senator Espaillat echoed this sentiment when he spoke of a two-tiered New York, saying, “and this debate is really about that as well: whether we can bring our communities to benefit from the innovation economy.” Cook noted the lack of minority and female participation in the technology industry, something that she argued would need to change for everyone to benefit in the future.

I spoke with Williams, a candidate and a former Clinton adviser, after the debate. He reiterated his plan to expand STEM education through after-school programs and initiatives to get children to start school at a younger age. He said that in order to ensure that Harlem and the New York 13th is competitive in the digital age, education needs to take a more holistic approach, starting earlier and engaging students during and after school hours. In the debate, Williams said, “but because we’re so far behind the eightball, as far as black and brown communities, we need to start educating our kids much earlier and we can expose them to technology at a much younger age.” It will be up to the candidate who wins to make that vision a reality.