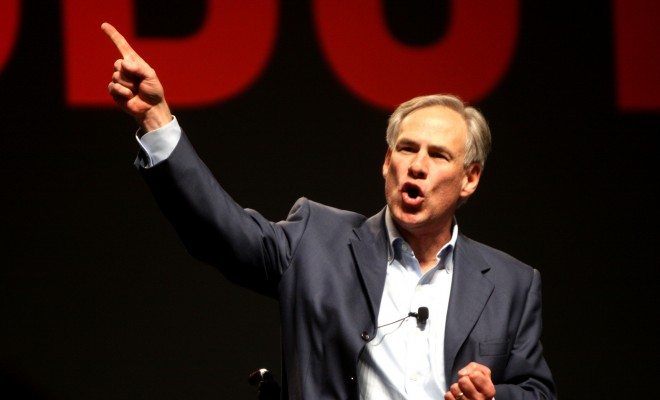 Governor Greg Abbott (R-TX) has taken a new, innovative approach to dealing with the insane conspiracy theorists in his state. He appears to have joined them.

Since President Obama was elected in 2008, a number of particularly unhinged individuals have spouted theories that he’s going to enact some sort of martial law, or take over the country. It’s a fringe theory, to be sure, but one that has permeated many facets of the extreme right wing side of the internet. Go ahead, google “Obama martial law.” I’ll wait here patiently, while you get sucked into the crazy wormhole. The theories all boil down to one particular idea–Obama wants to remain President, so he’ll declare martial law and take over. This will, apparently, be the end of the United States as we know it.

One of the places where this conspiracy theory has taken hold is in deeply conservative Texas. So when the federal government announced that there will be a series of training exercises held by the United States military in a number of Southwestern states, including Texas, it raised red flags for some. Some very, very red flags.

Operation Jade Helm 15 will involve 1,200 special operations forces. It’s designed to help these special forces practice their readiness skills, and will take place in various sites across Texas, Arizona, New Mexico, Utah, Colorado, Nevada and California for two months this summer.  While in some cases it will not be immediately obvious that this is a military operation, as some of the forces involved may be blending in as civilians, only public land will be used, or private land if the government has gotten permission to use it. Practice operations like this are a relatively normal practice for our military, and happen on a fairly regular basis.

However, the  people waving those very red flags seem to think that it will lead to tyranny, martial law, and takeover by the federal government.

Some are even purporting that the protests in Ferguson and more recently, Baltimore, are a set-up for more extended martial law in Texas and around the country. Again, not only is this completely bonkers, but it does a complete disservice to the very real issue in our country of police militarization and abuse.

Obama is taking over Democrat-held cities via martial law like ISIS is taking over places in the M.E. via #SocializedTerrorism @CyberMommie — Kickin’ It Crews (@imcrews) April 28, 2015

In light of this totally irrational paranoia and terror, Governor Greg Abbott decided to get on board and stoke his citizens’ fears by ordering the Texas Militia to monitor Operation Jade Helm 15. Abbott elaborated in a letter to Major General Gerald “Jake” Betty his reasoning for the monitoring, stating:

During the training operation, it is important that Texans know their safety, constitutional rights, private property rights and civil liberties will not be infringed.

In response to Abbott’s horribly misguided call, White House Press Secretary Josh Earnest spoke for many of us when he bluntly stated: “I have no idea what he’s thinking.”

Abbott stating that he will be monitoring Operation Jade Helm 15 so that Texans know that their rights will remain in tact can mean one of two things. The first that he could be acting like a dad who will check in the closet for monsters so his child will go to sleep, even though the father knows that there are no monsters in the closet. That’s an unflattering picture to paint of a chief executive of a state–that he thinks his citizens are so idiotic and immature that they can’t simply be told that there is no monster in the closet.

Or, by ordering the forces to keep an eye on the operation, Abbott is telling his citizens that their worries are warranted and that there’s a chance that their rights won’t remain protected. By doing so, Abbott is legitimizing the conspiracy theorists who are freaking the fuck out about a relatively normal military practice operation. That’s not so great either, because that tells me that the head of our second biggest state thinks there’s a chance, however infinitesimal, that the federal government could be coming to take over his state.

I don’t care what side of the aisle you’re on, I think we’re all a little too old for conspiracy theories and monsters in the closet. Too bad Governor Abbott doesn’t agree.

Anneliese Mahoney
Anneliese Mahoney is Managing Editor at Law Street and a Connecticut transplant to Washington D.C. She has a Bachelor’s degree in International Affairs from the George Washington University, and a passion for law, politics, and social issues. Contact Anneliese at amahoney@LawStreetMedia.com.
Share:
Related ItemsConspiracy TheoryGreg AbbottJosh EarnestMilitaryMilitiaOperation Jade Helm 15Texas